A sacred day for Shiite Muslims was marred by a scuffle and the arrest of two men at a mosque in western Sydney. 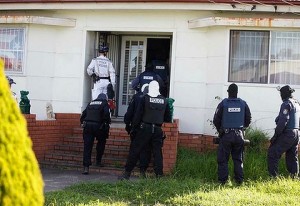 Shiite Muslims were gathered at Arncliffe Mosque on Sunday to mark Ashura – a  holy day marking the death of the grandson of the prophet Muhammad.

About 1 pm, the seated worshippers became suspicious of an unfamiliar man who witnesses say moved towards the mosque’s imam while playing with a mobile phone.

‘‘He started praying by himself when everyone was sitting, which made people suspicious,’’ said a witness who did not want to be named. ‘‘They dragged him out.’’

An argument and scuffle then broke out before police arrived and arrested the ejected man and another man, waiting outside, for causing a disturbance.

Police said they believed the men were suffering from mental illness had no information to suggest that they were armed or affiliated with a particular religious group.