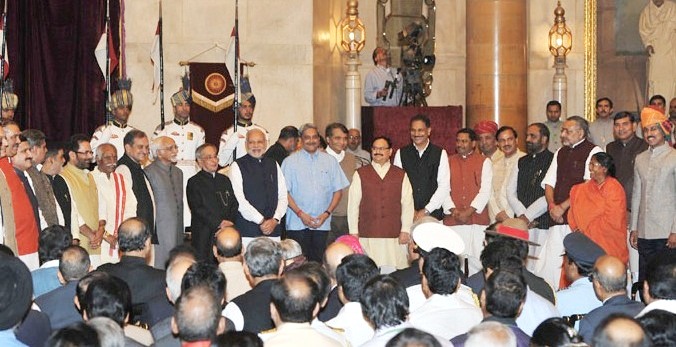 Former Goa Chief Minister Manohar Parrikar and three others were inducted into the Indian Cabinet on November 9 as Prime Minister Narendra Modi expanded his Council of Ministers, bringing in 21 new ministers as Shiv Sena kept away from the exercise.
Suresh Prabhu, a former Shiv Sainik and Power minister in Vajpayee government, senior BJP leader J P Nadda and Jat leader from Haryana Birender Singh, who joined BJP ahead of Assembly elections, were the other Cabinet ministers to take oath of office and secrecy at a function in the Rashtrapati Bhawan.
Unresolved issues between Sena and BJP in Maharashtra stopped Sena MP Anil Desai from taking oath as he reportedly returned to Mumbai from the airport after arriving New Delhi today morning.
Bandaru Dattatreya and Rajiv Pratap Rudy, who were ministers in the Vajpayee government, and Mahesh Sharma, newly-elected MP from Gautam Buddh Nagar bordering Delhi, were sworn-in as Ministers of State with Independent Charge.
14 other Ministers of State were sworn-in. They are Mukhtar Abbas Naqvi, Ram Kripal Yadav, Haribhai Parthibhai Chaudhary, Sanwar Lal Jat and Mohanbhai Kalyanjibhai Kundariya Giriraj Singh, Hansraj Ahir, Ram Shankar Katheria, Jayant Sinha, Rajyavardhan Singh Rathore, Babul Supriyo, Sadhvi Niranjan Jyoti and Vijay Sampla (all BJP) and Y S Chowdary, a Rajya Sabha member from TDP.
This is the first revamping exercise of his ministry undertaken by Prime Minister Narendra Modi since he assumed power in May. Parrikar is all set to be given Defence portfolio, which was held as additional charge by Finance Minister Arun Jaitley.
The strength of the Union Council of Ministers goes up from 45 to 66. Of this, 27 including the Prime Minister are of Cabinet rank, 13 Ministers of State with Independent Charge and 26 Ministers of State.
Ahead of the swearing-in, the new ministers had a breakfast meeting with Modi at his Race Course residence.
An IIT graduate, 58-year-old Parrikar shares an excellent rapport with Modi and has a reputation for probity and administrative skills.
Prabhu also earned his reputation as a skillful operator and reformer as Power minister in Vajpayee government but was suddenly pulled out of the ministry by Shiv Sena. Ever since has not been seen as an active Sainik.
Dattatreya’s inclusion gives representation to the new Telangana state in the Union ministry while Rudy makes a comeback into the government. First-time MP Mahesh Sharma seems to be a surprise choice as a Minister of State with Independent Charge given the fact that Naqvi, a former minister, has been given just a Minister of State berth.
All the other Ministers of State are newcomers and first-time MPs except Ram Kripal Yadav, who had been a Member of Parliament either of the Lok Sabha or Rajya Sabha having come from RJD in Bihar.
The swearing-in ceremony was attended among others by Vice President Hamid Ansari, Lok Sabha Speaker Sumitra Mahajan, Rajya Sabha Deputy Chairperson P J Kurien, Modi and his Cabinet colleagues, BJP patriarch L K Advani and the Chief Ministers of BJP-ruled states Vasundhara Raje, Raman Singh, Manohar Lal Khattar and Andhra Pradesh Chief Minister Chandrababu Naidu of TDP. None from Congress was present in the ceremony.