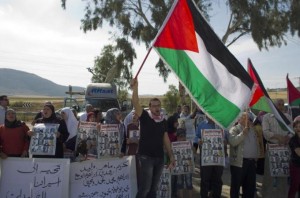 Ramallah, Occupied West Bank – Ismat Mansour was only 16 years old when he was arrested and sentenced to 22 years in prison for complicity in killing an Israeli settler.

At the time, the first intifada – the Palestinian uprising against Israel’s occupation of the West Bank and Gaza Strip – was in its final throes. Today, 37-year-old Mansour is a writer, journalist and Hebrew-language instructor making use of the skills he acquired during his 20 years behind bars.

Mansour was released in August 2013 as part of a US-brokered political process to secure a peace agreement between Israel and the Palestinians. Israel pledged to free 104 long-time Palestinian detainees in four stages. In exchange, the Palestinian Liberation Organization (PLO) promised not to seek membership in UN organisations or sign international treaties until the end of April.

All of the 104 Palestinians set to be released had been incarcerated in Israeli prisons since before the Oslo Accords were signed between Israel and the PLO in 1994. According to the 1999 Sharm El SheikhMemorandum, all of them were supposed to be freed by October of that year. But that never happened.

The PLO is the highest representative body for Palestinians worldwide. The Palestinian Authority (PA) was created for a provisional period to manage the territories Israel withdrew from in accordance with the Oslo Accords. The PA continues to administer the day-to-day Palestinian affairs in the occupied West Bank because no final peace agreement has been reached.

Mansour, like many of his released compatriots, had already served out the majority of his sentence when he was set free, making his way home to the West Bank village of Deir Jarir, close to Ramallah.

While he was ecstatic to reunite with his family, Mansour said the final batch of 26 detainees is being used as political pawns by Israel. “The prisoner issue has become subject to blackmail,” he said. Israel hasrefused to release the fourth and final group of prisoners unless the peace talks were extended past the original deadline of April 29.

“Many predicted that the fourth phase [of the prisoner release] wouldn’t be carried out,” said Mansour. “That’s what happens when the release is piecemeal and not carried out in one go.”