Here’s what it gets right and wrong

“Inside Out,” Pixar’s latest film about a young girl and her motley crew of emotions, debuted at $91.1 million this past weekend — a box office record for domestic openings.

The movie has so far earned rave reviews, particularly for its imaginative portrayal of five emotions — Fear, Disgust, Anger, Sadness, and Joy — as they jockey for the limelight inside the head of Riley, the main character.

Even as a children’s movie, the film employs pretty sophisticated psychological concepts (even if they don’t entirely exist).

Here’s what “Inside Out” gets right, mostly right —  and what the film just made up.

Each night, when Riley goes to sleep, the “headquarters” where her emotions live shuts down. The memories that came rolling down a track earlier in the day, in the form of colored, emotion-specific balls, all get sucked up through a vacuum tube to be sent to the vast realm of long-term memories.

During the day, we use our working memories to keep track of small tasks and facts. It’s only once we enter slow-wave sleep — or deep sleep — that our brains really cement some of the most important memories for much longer.

Several times throughout the movie, Riley, an avid hockey player, recalls missing the winning goal during a championship game back in Minnesota.

At first she’s crushed. She sits alone on a tree branch, licking her wounds. When she remembers this moment, back at headquarters the memory ball is colored blue.

A few moments later, her teammates cheer her up by hoisting her onto their shoulders. Now the memory shines yellow.

Herr says this flip-flopping happens all the time in the real world. We remember certain events through the lens of our current emotions. When we’re sad, the memory of a family road trip might just remind us of a stuffy car. When we’re happy, we remember the adventures.

“Being able to recognize that our memories aren’t just simply good or bad, but have different sides to them, is a way people cope with their complicated lives,” Herr says.

This process is known as “reframing,” he adds, and it can help boost people’s psychological health and well-being throughout their lives.

When we first meet Sadness, she’s kind of a bummer. When Riley’s family moves from Minnesota to San Francisco, she only seems to make things harder for Riley. And her self-loathing doesn’t help.

Back at HQ, Joy is nowhere to be found. When Riley’s mom tells her daughter to cheer up, that only makes things worse.

“She can’t push away the sadness,” Herr says. Either she has to escape the feeling or embrace it.

Initially she chooses escape. But as she finds herself clad in all black on a grimy city bus, running away to Minnesota, she remembers when her mom and dad came to comfort her on the tree branch. It was her sadness that made them want to help.

“That interplay between our emotions and the way the movie says, ‘Hey, it’s OK to have different emotions be in charge and not necessarily hate our sadness’ is a good message,” Herr says. 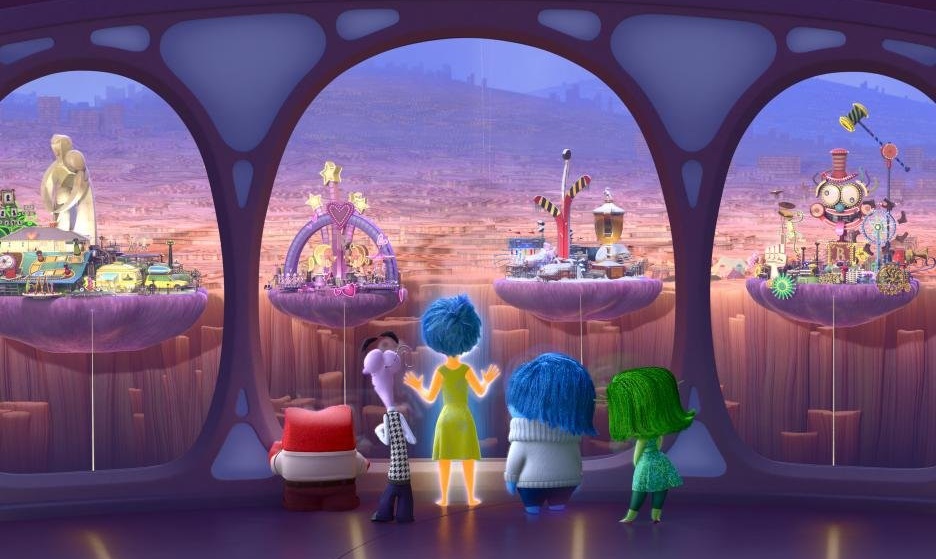 The driving force behind “Inside Out” is the journey Joy and Sadness go on to salvage Riley’s sense of self in the face of a big life change.

Along that journey, Joy is tasked with keeping safe a backpack full of Riley’s “core memories.” They are five golden balls that contain treasured moments from her past. Repeatedly, Joy tells Sadness not to touch these memories. Once they’re turned blue, they can’t be changed back.

In the logic of the movie, core memories can be thought of as even stronger long-term memories. But Herr says they aren’t so much hard psychological frameworks as nice moments we hold close.

“There do seem to be memories that people feel are kind of central to their identity,” he explains. But these can’t actually be found anywhere in the brain as the movie purports.

In the same vein, the ultimate goal of Joy and Sadness is to keep several large, theme-park-like structures from crumbling. These “Personality Islands” mark the different sides of Riley — her love of hockey, her goofiness, her sense of right and wrong, the bond she has with her parents.

As more terrible things happen to her, these structures collapse. The only way to rebuild them is through a change of heart.

Similar to core memories, these islands of personality don’t necessarily “exist” anywhere in the brain. But they certainly make up crucial parts of our identity, Herr says.

“With personality, I think of certain traits like aggression or neuroticism or extroversion,” Herr explains. These are descriptors for how we respond to stimuli in our environment.

As “Inside Out” shows, personality as a collection of identity factors is important, Herr says. “But that wasn’t quite what they were referring to.”

They made that up

Call it a cheap shot to say they “made up” imagination, but hear us out.

In 2013, scientists put subjects inside an MRI scanner to see which parts of their brains lit up during imagination. Several key structures seemed to be involved, but ultimately the research hit the same dead end that a lot of imagination research hits.

We just don’t know how we do it.

Perhaps that is the biggest complaint one can lob at the movie’s treatment of imagination. Psychology doesn’t know how imagination works well enough to depict it so fantastically.

There is a silver lining.

When Joy, Sadness, and their sidekick Bing Bong — Riley’s imaginary friend — enter Imagination Land’s off-limit zone of Abstract Thought, they lose their complexity in four stages. By the fourth stage, the three characters have been reduced to colored amorphous blobs.

As we age into our teenage years, we really do gain the ability to think more abstractly than when we were kids. We think about concepts and ideas rather than just objects.

Herr admits, “I think that was one case where it was probably more artistic than it was brain science.”

But then again, it is Pixar. A little artistic license is to be expected.