All-rounder tears through Pakistan’s batting line-up to lead hosts to a comfortable seven-wicket win in the third ODI.

All-rounder Thisara Perera led Sri Lanka to a seven-wicket victory on the Duckworth/Lewis Method against Pakistan in the series-deciding third and final ODI. 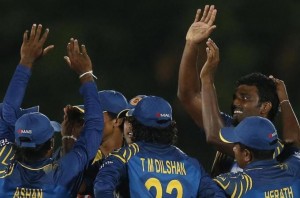 Perera grabbed 4-34 and tore through Pakistan’s batting lineup with lively short pitched deliveries to restrict the visitors to 102 in 32.1 overs – Pakistan’s second lowest ever ODI total against Sri Lanka.

Sri Lanka’s target was revised to 101 after rain intervened in between a flurry of Pakistan wickets and the match was cut to 48 overs a side.

The home team raced to 104-3 in 18.2 overs with Tillakaratne Dilshan scoring an unbeaten 50 off 55 balls, raising his half century by hitting the winning boundary.

Fawad Alam top scored with an unbeaten 38 but wickets continued to tumble at regular intervals which negated Pakistan captain Misbah-ul-Haq’s decision to bat first after winning the toss.

Sri Lanka had whitewashed the tourists 2-0 in the Test series.