Costly equipment for biomechanical analysis at the National Cricket Academy (NCA) in Lahore is now set to be used, after years of neglect. The PCB has also approved renovation work at the NCA indoor school, and is updating it with a 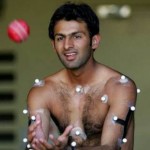 The biomechanical equipment was procured for about Rs 44 million ($460,000) when Nasim Ashraf was in charge of the PCB, and was meant to be installed by December 2008. Since then all the equipment – 18 cameras along with the other supporting apparatus and the relevant software have been unused. The project was put on hold by the then chairman Ijaz Butt after PCB’s audit revealed massive financial mismanagement and the construction contract for the laboratory where the equipment was to be housed was suspended.

According to the plan, part of the NCA’s outdoor practice area was to be used to accommodate the dedicated laboratory that would enable biomechanics experts to take a 2D analysis of a bowler’s action, by filming the players and then reducing the video to a stick-figure animation.

The NCA biomechanics lab is equipped with state of the art Advanced Motion Capture Architecture from the UK-based Vicon Motion Systems Limited. The lab will operate with 18 motion-capture cameras and 6 high-speed video cameras. The lab was temporarily activated for a brief period at the NCA indoor school earlier in 2008 by the Vicon experts but was later shut down.

“We are very enthusiastic about technology and keen to see the biomechanics lab functioning as soon as possible,” PCB director academies, Intikhab Alam, told ESPNcricinfo. “We are in no doubt about its scope and execution in research and for the development of the game and we obviously want to see the technology to be used in our players’ development.

“We look forward to the use of the tool that will not only help bowlers to correct their flawed actions but can also help the batsmen to enhance their performance. It can also prevent injuries and be used for rehabilitation process. I don’t know why the equipment was unattended but importantly now we have been given the go-ahead by the chairman and we have started retrieving all the documentation and updating them accordingly to kick off this landmark project.”

The PCB still has an understanding with Vicon, who will install the equipment once the building is completed. The project, according to Alam, will be managed by a team that includes a biomechanics expert, doctors, a mathematician, computer analysts and coaches.

“We have entered the first phase of negotiation with the experts to be taken on board for making the lab functional,” Alam said. “The key role is that of a biomechanics expert and we are already engaged with an expert who has done her PhD from Austria. We will soon reach an agreement with her and a mathematician to work the laboratory. Besides, we have all the medical doctors, well-trained analysts and coaches.” Alam confirmed that the equipment was in good shape though the software needed some upgrading. Once operational, the PCB will be the only board in Asia to own a biomechanics lab. (Source; ESPN Cricinfo by Farooq Umer).