Officials sworn in after Hamas and Fatah conclude negotiations for consensus administration. 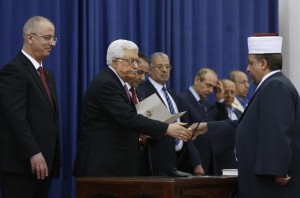 Ramallah, occupied West Bank – Fatah and Hamas have unveiled a government of national consensus that will pave the way for elections for a new Palestinian president and parliament.

The government of 17 politically-independent members, agreed on Monday, is already being put to the test, as Israel announced it would not negotiate any peace deal with it.

The announcement came after the passing of a five-week deadline that followed a reconciliation agreement on April 23. The new Palestinian government was agreed after arguments over who would take certain portfolios, and what would happen to Hamas-affiliated security forces.

The two sides, the Palestinian Authority in Ramallah, and the Hamas-led government in Gaza, agreed to keep nine ministers, including the prime minister, Rami al-Hamdallah, in their original positions.

Six cabinet members will manage two ministries, just like Hamdallah, who also serves as interior minister. The official task of this government will be to push for re-building the Gaza Strip, and to pave the way for elections in 2015.

In a pre-recorded message that aired on Palestine TV, Abbas said the new government was transitional, and that negotiations with Israel would remain in the hands of the Palestine Liberation Organisation. “This government, like its predecessors, will abide by all previously signed agreements and the PLO’s political agenda,” he said.

The PLO is the highest representative body for Palestinians worldwide. The PA was created for a provisional period to manage the territories Israel withdrew from in accordance with the Oslo Accords.

Hamas and Fatah had disagreed over the position of foreign minister. Hamas eventually agreed to a request by Abbas to keep the incumbent, Riad al-Malki, a close confidant.

Hamas had also rejected having Mahmoud al-Habash, known for criticising Hamas during Friday sermons, as minister of religious affairs. Fatah and Hamas had also failed to agree over whether the PA’s security forces would be allowed to return to Gaza.

Hamas had also said it would not endorse the new entity if Fatah pushed for demoting the status of the prisoners’ ministry to a commission that would come under the control of the PLO. Protests took place in Gaza on Sunday to that effect.

Some Palestinians were optimistic that reconciliation efforts would pay off. “We expect this agreement to yield different results this time around, especially because Hamas is suffering,” said Bassam Zakarneh, who heads the PA employees’ union.

“Its only option, now that its relationship with Egypt is sour, is to compromise and thus improve its political positioning internationally and regionally.”

Israel meanwhile refused to allow the passage of at least three prospective ministers from the Gaza Strip to the occupied West Bank, while it called on the international community to shun the new Palestinian government.

On Sunday Israel’s security cabinet, convened by prime minister Benjamin Netanyahu, agreed on a series of punitive measures, including the withholding of some tax it collects on the PA’s behalf, and freezing negotiations with the Palestinians as long as Hamas agreed to its the consensus government.

In his pre-taped message on Monday, Abbas said he would respond to any collective punishments imposed, but did not elaborate. “Israel’s threatening messages show the real intentions of the occupation,” he said. “We don’t want an escalation, but we cannot stand idly by.”

Israel halted US-sponsored talks in April after it backed down on an agreement to release a group of veteran Palestinian prisoners, which led the PA to join international treaties and sign a reconciliation pact with Hamas.

Israel’s punitive measures are despite repeated Palestinian assurances that the new government will be led by non-political technocrats who accept previously-signed peace agreements, and that the Palestinian security coordination with Israeli forces would continue. Last week, Abbas called coordination efforts “sacred”.

Earlier on Sunday, however, Netanyahu said: “Hamas is a terrorist organisation that calls for the destruction of Israel and the international community must not embrace it.”

Back in 2007, when a short-lived unity government was forged between Fatah and Hamas, Western countries withheld aid from the Palestinians. Circumstances have changed, and the US and the EU signalling they are open to testing the waters of this new government.

Yaron Ezrahi, professor emeritus of political science at Hebrew University, said Palestinian reconciliation posed a challenge to Netanyahu and the governing Israeli coalition. “This government is a great threat to the refusenik policies of the Israeli right-wing government, because the excuse that Abu Mazen [Abbas] does not represent the Palestinians, or that the government is half of the Palestinian nation is falling apart,” Ezrahi said.

Both Hamas and Fatah have much to lose should this reconciliation pact falter. Hamas is reeling from the effects of an Israeli blockade and an Egyptian crackdown on border tunnels. Abbas, whose mandate expired in 2009, is battling a constituency frustrated by a limping economy, stalled talks and Israeli settlements on occupied West Bank land.

“In the long run, this is great news for Palestinians and for the prospect of effective negotiations provided that it doesn’t fall apart,” Ezrahi said. “The Israelis are wishing it falls apart; they are building on that.”