Pakistan opposition politician Imran Khan says he has suspended talks with the government after it appointed a new police chief in the capital Islamabad for an expected crackdown on anti-government protesters. 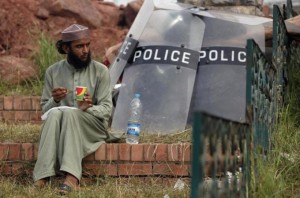 Thousands of Khan’s supporters are besieging parliament for a second day on Thursday to press prime minister Nawaz Sharif to resign over alleged election fraud.

Protesters led by Khan, the leader of the opposition Tehreek-e-Insaaf party, and anti-government cleric Tahir ul-Qadri, tore down barricades late on Tuesday and entered the so-called Red Zone that houses key government buildings.

Their representatives held talks with the government early on Thursday after Pakistan’s powerful army chief, general Rasheel Sharif, requested that Sharif’s government negotiate with the protesters.

Khan’s decision came after the country’s national assembly rejected his and Qadri’s demands, saying they were unconstitutional.

Most protesters on the streets of Islamabad say they are demonstrating against government corruption, which they blame for the country’s widespread poverty.

Kamal Hyder, reporting from Islamabad, said that Khan accused the US of also interfering with the internal affairs of Pakistan. The US embassy in Islamabad said they were monitoring but were not interfering with what is going on.

He said that supporters of Sharif were starting to take to the streets in cities other than Islamabad. “It appears that this crisis may go beyond Islamabad. If the authorities do decide they want to remove the protesters, anything can happen. The next 24 hours are indeed critical,” he said.

Khan wants Sharif to step down because he believes the prime minister rigged last year’s polls.

Sharif won the election by a landslide, taking 190 out of 342 seats in the national assembly. International observers said the polls were free and fair.

The ballot was the first democratic transfer of power in Pakistan’s history and also propelled Khan from a fringe player to head of the third-largest legislative bloc in the country.

Qadri, who controls a network of Islamic schools and hospitals, wants Sharif to step down because he says the system is corrupt.

He has promised free housing for the homeless, and welfare and subsidized food and electricity for the poor.