MQM confirms arrest of Hussain, but say MQM party leader is innocent, as police continue to search his London home. 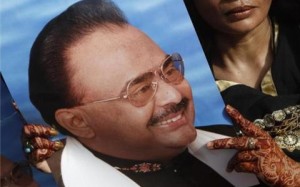 A Pakistani political leader has been arrested in London and taken into custody on suspicion of money laundering.

A representative of the MQM party confirmed that its party chief Altaf Hussain, 60, was arrested on Tuesday by Metropolitan Police at his home in northwest London.

Scotland Yard issued a brief statement on Tuesday morning regarding the arrest, but refused to identify the person arrested. It confirmed to news media agencies that the same person had been taken into custody, but did not reveal the whereabouts of the police station.

Speaking from London, MQM’s Nadeem Nusrat told that police arrived at Hussain’s house between 07:30 and 08:00 GMT.

“They had a search warrant and wanted to question him on suspicion of money laundering,” Nusrat said.

“He and the police are still at the house, the search is still going on. We have tried to go to the house but police have stopped us from seeing him.

“There is a perception that when someone has been arrested that they are taken somewhere but, as of 15 minutes ago, he was still at home. We vehemently deny the charges.”

Nusrat claimed police had gone to Hussain’s house to take a statement, following previous allegations of money laundering, rather than take him into custody.

Gunfire and protests began in the Pakistani city of Hyderabad, an MQM stronghold, within minutes of the arrest being reported.

Nusrat appealed for calm in Pakistan, especially Karachi, the biggest MQM base.

“There is a lot of anger and rumours are circulating,” he said. “We have appealed for people to remain calm.”