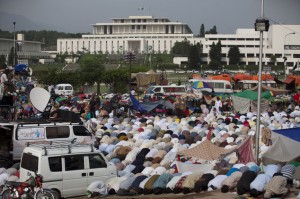 The joint parliament session was purposely televised by the government on National Television (Pakistan Television) from where other private satellite channels on-aired the session internationally. The obvious reason of telecast live the speeches of few prominent members of the Senate and National Assembly was to deliver a message to the people of Pakistan and the international powerbrokers of Pakistan especially United States, China, United Kingdom and Saudi Arabia that all the political parties in the parliament are united against the on-going sit-in protest outside the Parliament by the two rising political powers of Pakistan – Dr. Allama Tahir-ul-Qadri the leader of Pakistan Awami Tehreek (Pakistan National Movement)  and Mr. Imran Khan leader of Pakistan Tehreek-e-Insaf, (Pakistan Justice Movement).  Despite of the fact that thousands of protesters were sitting and protesting outside the parliament house and all the major entrances to the parliament building were blocked, the ruling leadership were desperate to have joint session and the members of the Senate and National Parliament in good numbers were able to attend the joint session including the Prime Minister Nawaz Sharif, Interior Minister Nisar Choudhry and leaders of the main political parties in the parliament except Tehreek-e-Insaf (PTI). It is to be noted that this is the same Prime Minister who has not attended a single session of the Senate since he has been in power and he has hardly attended couple of sessions, for short, the sessions of national assembly.

The dramatic move occurred when Javed Hashmi who recently left Imran Khan entered into the hall and the members especially the ruling party parliamentarians gave him warm welcome. It was looking as like a planned move by the Prime Minister Nawaz and his partners. So, apparently this was the political weapon used by the Prime Minister Nawaz Sharif currently struggling to retain his power and his current system of parliament from the on-going Revolutionary March of Dr. Tahir-ul-Qadri and Political Reform Movement (name as Independence March) of Mr. Imran Khan. Javed Hashmi is a very wobbly political character. He is known as a veteran politician but he has served the military rule of General Zia-ul-Haque as Minister for Youth Affairs, then joined Muslim League Nawaz Party (which is a creation of late 1980s by Pakistan army and intelligence agencies) and became the minister for health then he left Nawaz’s party and joint Imran Khan’s Tehreek-e-Insaf when PTI was touching the rising popularity in the masses and now he left Imran’s when Imran is going through a defining movements in his political career and PTI is fighting to bring a political reform in Pakistan. Unfortunately, Javed Hashmi has been suffering from a physical illness and now it looks like he has some psychological issues as well.

Live televised images of the Prime Minister Nawaz Sharif, sitting in parliament quietly, was clearly signalling his anxiety and tyranny of his face. He is an arrogant and rigid character which is a non-political attribute. He is hardly seen smiling and even when he smiles, his smile looks enigmatic.

The collective focal point of the speeches of the members of the representatives of the parties present in the joint session was to defend themselves against their conflict with Imran Khan and Dr. Qadri. There was no concern shown by any speaker on the demands of the thousands of protesters sitting outside the parliament house for the last 2 weeks or more, there were no regrets and confession on the killing of innocent men and women in the incident of Model Town Lahore, there was no justification or reasoning given by any speaker on the killing and injuries of the protesters in result of the brutal operation by the law enforcement agencies, and there was no facts and figures presented by anyone on the economic & monetary loss Pakistan has suffered in the last 20 days or so due the on-going demonstration in the Capital. Similarly, there has been no workable political solution presented by anyone to resolve the on-going dispute between Imran Khan, Dr. Qadri and the leaders of the ruling party. The entire session was just an utter demonstration of power, showing muscles to the Imran Khan and Dr. Tahir-ul-Qadri.

This joint session and its live coverage on national televisions exposed the mentality and wisdom of these commercialised parliamentarians. It has clearly a message to the Pakistani nation that they are there just for their own sake and vested interested. They have no interest on the national issues and integrity of the country on the on-going political crises and law and order situation in the Capital. Their only agenda of having this type of joint session to defend themselves and to demonstrate unity to save this corrupt but beneficial system for them.

Choudhry Nisar is an interior minister but he has shown no capability and ability to prove for the portfolio he has been carrying. His statements are conflicts, he lies in front of cameras, and he threatens to political rivals and so on. His speech in the joint session was just crap containing the same stories of conflicts and lies.

Mahmood khan Achakzai whose outfit wearing typical shawl demonstrate his tribal mentality. His language is non-parliamentary and his tone was a shame being sitting in national parliament. His brother is given a job of Governor of Baluchistan by the Prime Minister Nawaz Sharif and many members of his family are also in government, therefore, his job is to defend every right and wrong action of Nawaz Sharif and his government. He called thousands of protestors, sitting outside parliament, ‘gypsies’. He condemned the attack on the building of the Pakistan Television by the protestors but he never condemned the attack and destruction of the residency of father of the nation Mohammed Ali Jinnah in Quetta being his city. The fact of the matter is that the people like Mr. Achakzai from Baluchistan have interest in Pakistan as long as they are receiving personal benefits from Pakistani government. These elements are basically blackmailers who blackmail Pakistani government, bureaucracy and army and fulfil their personal goals.

This was totally disgusting. It is a shame for this parliamentary system of Pakistan where people like him can be a member of national assembly.

Mr. Aitzaz Ahsan was representing opposition, Pakistan Peoples Party (PPP). He is one of those prominent lawyers of Pakistan who make millions of dollars from court cases representing government. He behaves himself as he is the champion of democracy but the fact of the matter is that he has never ever worked in public for the common people of Pakistan. He is from the elite class of Pakistan who want respect and leadership as granted. The entire agenda of his speech and his presence in the joint session was just to save Prime Minister so that this corrupt system can be retained in which he is one of the great beneficiaries.

Khalid Maqbool Siddiqui of Mutehida Quomi Movement (MQM) of Altaf Hussain, in his speech attacked Imran Khan on MQM’s mandate in Karachi. The agenda of his speech was to warn Imran Khan that Karachi and Urban Cities of Sind are of MQM and MQM wouldn’t spare any space for PTI in MQM’s controlled cities.

Moulana Fazl ur Rehman of Jamiat Ulema-e-Islam (JUI-F) speech was full of shameful critics on the section of the protesters of PTI. He even doen’t have ethics and understanding of what role he is in being the representative of the people of Pakistan in the national assembly. He abused boys and girls that they were shamefully dancing at the PTI demonstration. He was making jokes and laughing leaving impression on viewers that he has no concern and care about the crises in the capital.

The speeches of these parliamentarians display the level of interest they have on national issues in the larger interest of the country’s stability and integrity. Their politics only surrounded by their own vested agenda and that is the reason that these parties of status quo maintain spend their entire time in the parliament to achieve their personal and party goals. This is reason they all are united on the name of saving the parliamentary system. On the other hand and the fact of the matter is that these political pundits have no guts, no ability, no vision and no wisdom for the nation and country. They are self-centered individuals who have common goals to make themselves stronger on the cost of the unity of the nation and integrity of the state.

As for as the current crises in the Capital, the situation is getting worst day by day which could lead to the disaster for the country. In this situation the only institution of Pakistan that can save Pakistan and deliver peace and safety to the people of Pakistan is Pakistan Army. However, wait and see from army Chief General Raheel Sharif is testing the nerve of the Pakistani Nation at present.