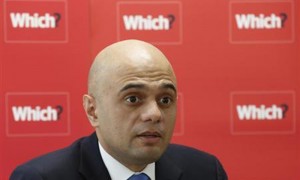 Javid has served since last year as financial secretary to the Treasury.

Cameron said on Twitter that lawmaker Nicky Morgan will step up to the financial secretary post at the Treasury, key to the government’s relationship with the financial services industry, from her current role as economic secretary.

Javid, the son of a Bristol bus driver, worked for Chase Manhattan Bank and Deutsche Bank before starting his career in politics. He was elected as a member of parliament in 2010.

His father, Abdul, a bus driver, came to the UK from Pakistan in 1961, reportedly with just £1 in his pocket, according to the BBC website

The website added that the self made millionaire , who is considered a rising star in the Conservative Party, is a devotee of Margaret Thatcher and has been tipped as a potential future leader.

Miller said she took “full responsibility” for her decision to stand down as culture secretary, saying she did not want to become a “distraction” from the government’s achievements.

She had faced a week of pressure from the main opposition Labour Party, and growing criticism from her Conservative Party colleagues, over payments she had claimed were linked to a loan on a home in Wimbledon, south London.

Prime Minister David Cameron had come under fire for giving Miller his backing over the issue, and in accepting her resignation said he was “sad that you are leaving the government in these circumstances”.

Miller oversaw the ongoing negotiations on creating a new system of regulation for Britain’s famously aggressive newspapers that resulted from a public inquiry into press standards.

She also steered through the legislation that ushered in gay marriage.

Asked if she believed she had been the victim of a media witch-hunt due to her role in implementing the recommendations of the press standards inquiry, Miller said in a television interview: “I fully accept the findings of the parliamentary report. This is about that.”

An independent inquiry found she should pay back £75,400 for expenses she overclaimed on her mortgage, but that was cut to £5,800 by a committee of lawmakers.

In a sign of public anger towards members of parliament abusing the expenses system, more than 185,000 people had signed an online petition calling for Miller to pay back the larger sum or resign.

On Tuesday, she told her local newspaper she was “devastated” by the furore over her expenses and that she had “let down” her constituents, but stopped short of resigning.

Yet support even from her own party had ebbed away.

Two-thirds of Conservative Party members believed she should stand down, according to a poll, because they feared the row was an unwanted distraction in the run-up to European elections next month.

Labour lawmaker John Mann, who made the original allegations against Miller which triggered the standards investigation, said: “About time too.”

”Maria Miller should have resigned immediately and when she didn’t resign, Mr Cameron should have shown a bit of leadership and sacked her,” he told BBC radio.

Cameron will likely face questions over Miller’s resignation in his weekly question-and-answer session in parliament on Wednesday.

He was also due to face a meeting of senior Conservative backbenchers later.

Lawmakers’ expenses became a toxic issue in the British parliament in 2009 when newspaper revelations resulted in five members of the lower House of Commons and two from the upper House of Lords being jailed for fraud.