The concept of limited-overs cricket caught the imagination of players on either side of the Radcliffe line very quickly after they faced off in the 50-over format for the first time in 1978.

As a team, Pakistan has had the upper hand against India, having won 72 of the 126 One-Day Internationals so far, but on the other hand, India has a perfect 5-0 record against its rival on the biggest stage of all – in ICC Cricket World Cup matches. India has won against Pakistan in 1992, 1996, 1999, 2003 and 2011 – the last in a pulsating semi-final encounter.

The memorable duels the contests have produced overall have been equally fascinating. Javed Miandad’s last-ball six off Chetan Sharma, India’s successful defence of 125, Laxman Sivaramakrishnan’s ploy to get Miandad stumped and Saleem Malik’s unbeaten 36-ball 72 in a two-wicket win from the 1980s, the mastery of Sachin Tendulkar, Saeed Anwar, Wasim Akram and Waqar Younis in the 1990s and sparks of brilliance from Virat Kohli and Shahid Afridi in the 2000s dot the recent India-Pakistan landscape.

But the biggest battles of all came in World Cups. 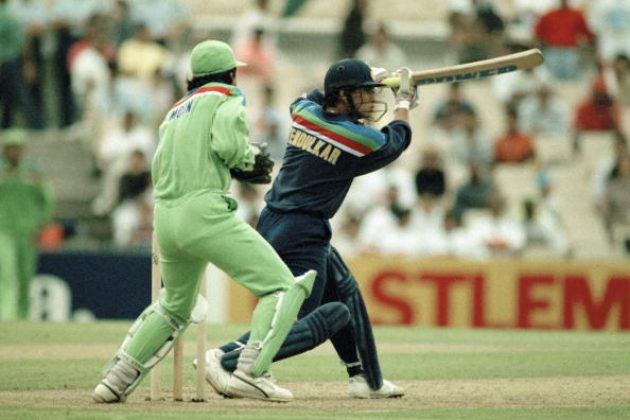 A young Sachin Tendulkar, with Test centuries in England and Australia already, played his first decisive knock in ODIs, as India opened its World Cup account against Pakistan with a 43-run win. Tendulkar’s unbeaten 54 and a sixth-wicket stand of 60 runs with Kapil Dev, after India had been reduced to 148 for 5 at one stage, took the side to 216 for 7, even though Mushtaq Ahmed finished with three sticks.

Looking for a much-needed victory, Pakistan, the eventual champion, lost two quick wickets in its chase before Aamir Sohail and Miandad added 88 runs to steady the ship. Miandad spent 34 overs at the crease, but was tied down by good bowling. With the required run-rate creeping up, wickets fell frequently and Pakistan was bowled out for 173 in 48.1 overs. 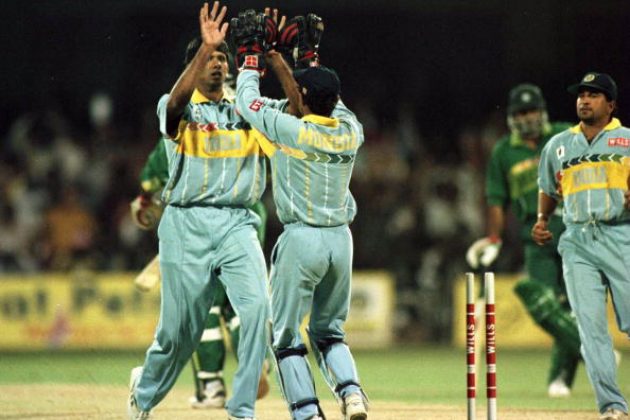 Wasim Akram dropped out on the morning of the quarter-final match because of a side strain and Aamir Sohail, the stand-in captain, lost the toss, as India made first use of a placid track in Bangalore to set the base for a 39-run win. Navjot Singh Sidhu (93) and Sachin Tendulkar put on 90 runs for the first wicket, before Pakistan pulled things back with regular strikes. But Ajay Jadeja’s 25-ball 45, including an onslaught on Waqar Younis in the final overs, took India to a formidable 287 for 8.

The opening pair of Sohail and Saeed Anwar got Pakistan off to a blazing start through an association of 84 runs, but after that India made key breakthroughs, with the slower bowlers drying up the run flow. Venkatesh Prasad accounted for three of the top four batsmen, and Anil Kumble contributed with three wickets of his own. Javed Miandad was run out in what proved to be his final international appearance, as Pakistan’s innings ended at 248 for 9.

Venkatesh Prasad produced his career-best bowling performance to help India beat Pakistan by 47 runs in front of 21,953 fans at the Old Trafford in Manchester. Rahul Dravid, who had closely followed the previous India-Pakistan World Cup game held in his hometown, made 61 – the highest individual score in the game. Mohammad Azharuddin chipped in with a vital 59 as India put up 227 for 6 after winning the toss on a track that had something for the bowlers.

Pakistan never got going in its chase in this Super Six encounter as the Bangalore trio of Javagal Srinath, Prasad and Anil Kumble picked up all ten wickets to bowl the opposition out for 180 in 45.3 overs. Aided by the swinging conditions, Prasad accounted for Saeed Anwar, Saleem Malik, Inzamam-ul-Haq, Moin Khan and Wasim Akram to return figures of 5 for 27 in 9.3 overs.

In the first India-Pakistan match in close to three years, Sachin Tendulkar produced one of the best performances in ODIs, and effectively knocked Pakistan out of the tournament. Tendulkar, who had been preparing for this fixture for over a year, made a 75-ball 98 in a chase of 274 after Saeed Anwar’s 101 had stolen the limelight in the first half of the game.

On a flat deck at the SuperSport Park, Tendulkar and Virender Sehwag handled the seam attack of Wasim Akram, Shoaib Akthar, Waqar Younis and Abdul Razzaq with ease. Shots flew to all parts of the ground in the opening wicket stand of 53 in 5.4 overs, with the upper cut six over point by Tendulkar off Akthar the standout shot.

In that over, Tendulkar also cut and drove the world’s fastest bowler for two fours, and the impact of his blade was such that Pakistan’s attack – among the most potent units in the world – seemed to lose its bite. After Sehwag and Sourav Ganguly fell for the same score, Tendulkar and Mohammad Kaif added 101 runs for the fourth wicket. Tendulkar was caught at gully off a rising delivery from Akthar with still 97 needed in 22.2 overs, but the fifth-wicket pair of Rahul Dravid and Yuvraj Singh got the job done with relative calm in the 46th over.

In a high-pressure semi-final game in Mohali, watched from the ground by the heads of the state of both nations, a team effort by India saw it triumph by 29 runs. Sachin Tendulkar led the way once again, recording his third World Cup half-century against Pakistan – with all three efforts netting him the Man of the Match award. Tendulkar’s 85 and Suresh Raina’s intelligent batting in the last 10 overs took India to 260 for 9, with Wahab Riaz returning a five-wicket haul.

Though Mohammad Hafeez made 43 in Pakistan’s chase, he was caught behind playing a sweep shot to a Munaf Patel delivery on the offstump, and that opened the floodgates. Each of the five Indian bowlers picked up two wickets, with Ashish Nehra’s 2 for 33 in 10 overs the best figures, as Pakistan was bowled out for 231 in 49.5 overs.

What to Expect at #cwc15

India and Pakistan will face each other on February 15, in what will be the first match for each team in the ICC Cricket World Cup 2015. Beginning with a high-profile, high-pressure match could make or mar either team’s chances, but there’s little doubt the winner will carry a load of momentum and confidence going forward in the tournament.

India, the defending champion, has the advantage of a mental edge in having beaten Pakistan each time in a World Cup, and will also have greater familiarity with the conditions – with many members of the squad having been in Australia since late November. However, Pakistan has shown it can be a rejuvenated side under Misbah-ul-Haq, and ultimately, the contest could well come down to who handles the big occasion better at the Adelaide Oval. 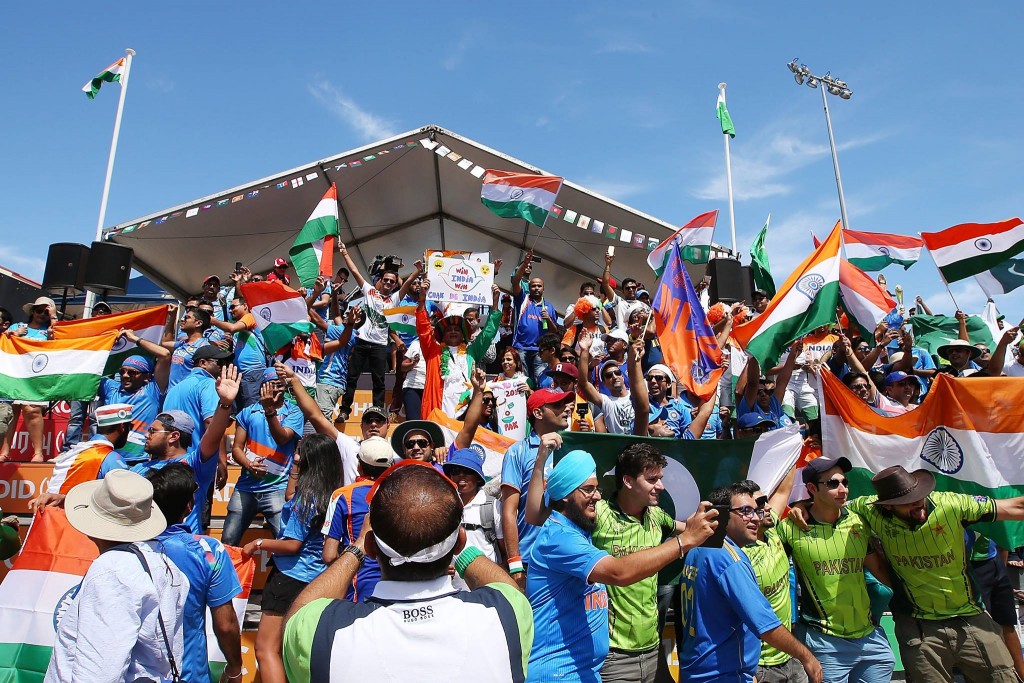