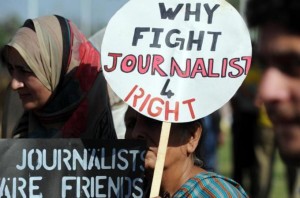 In a report published on Wednesday, called “A bullet has been chosen for you: Attacks on journalists in Pakistan”, the human rights group documents the threat it says the country’s media faces from political parties, armed groups, Pakistan’s intelligence agencies and other sources.

At least 34 journalists may have been killed in Pakistan because of their work since 2008, the group said, and eight have been killed since Prime Minister Nawaz Sharif was elected in May 2013.

“A critical step will be for Pakistan to investigate its own military and intelligence agencies and ensure that those responsible for human rights violations against journalists are brought to justice,” said David Griffiths, Amnesty’s Deputy Asia Pacific Director.

“This will send a powerful signal to those who target journalists that they no longer have free reign.”

The Amnesty report follows an attack on a high-profile political talk show host, who was shot and wounded in the city of Karachi earlier this month.

Television anchor Hamid Mir survived a recent attack and his employer, the privately owned Geo News television channel, has since accused the military’s Inter-Services Intelligence (ISI) spy agency of orchestrating it. The army has denied the allegations and demanded the channel be shut down.

Weeks earlier, another TV anchor, Raza Rumi, was attacked in the city of Lahore. He has since fled to the United States.

Criticising the ISI or the army is a widely-perceived a taboo in Pakistan and the confrontation between Geo and the military has sparked debate about press freedom in the country.

Amnesty’s report is based on research into 74 cases where journalists have been targeted for their reporting. The group says authorities investigated only 34 of the cases and only one person was convicted.