The leaders of two Pakistani protest movements have vowed to keep their protests alive until Prime Minister Nawaz Sharif resigns, after thousands entered the country’s capital in the biggest challenge yet to the 15-month-old civilian government. 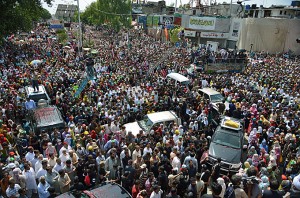 “I will not leave here until I have got real freedom for the country,” former cricket star Imran Khan, who heads the opposition Pakistan Tehreek-e-Insaaf party, told thousands of supporters who had followed him into Islamabad on Friday.

Anti-government cleric Tahir ul-Qadri, who has spearheaded a separate protest march from Lahore to the capital, planned to stage a sit-in with his followers and deliver a speech on Saturday.

“Dr Qadri will present the ‘Demands of Revolution March 2014’, which includes stepping down of Nawaz Sharif and his government and his immediate arrest,” said Qadri’s spokesman, Shahid Mursaleen.

reporter, reporting from Islamabad, said “three days of marches, convoys and protests through the Punjab province have culminated in this moment – both Khan and Qadri are now in Islamabad, 2km from parliament.

“They say they won’t leave until Sharif does, but with a majority in parliament, the ruling party is under no legal pressure to do so. Khan and Qadri’s supporters say they will not support any extra-constitutional measures to remove him, and so this leaves us at an impasse.”

The unrest has raised questions about Pakistan’s stability, at a time when the nation of 180 million is waging an offensive against the Pakistani Taliban and when the influence of anti-Western and sectarian groups is growing.

On Friday, a stone-throwing mob attacked Khan’s convoy as he led supporters through the eastern city of Gujranwala.

Gunshots were fired but Khan was not injured, his spokeswoman said. The government said there was no shooting, and police arrested 16 activists from the ruling party.

In Islamabad, authorities have blocked roads with shipping containers and barbed wire in an effort to control the marches, and riot police have been out in force, but there have not been any serious incidents.

“After previous protests held by Tahir-ul-Qadri had resulted in violent clashes between his supporters and the police, there were fears that this protest would also see violence. That has not come to pass,” Tribune’s  reporter.

Some members of Sharif’s party have suggested the protests are secretly backed by elements in the military, which has had an uneasy relationship with the prime minister.

To what extent Khan and Qadri can destabilise the government is likely to depend on the stance taken by the armed forces, which has a long history of mounting coups.

Few people fear a coup, but many officials think the threat of unrest will increase the military’s hold over the government.

The military has been frustrated with the government, in particular over the prosecution of former army chief and president Pervez Musharraf for treason.

There has been disagreement, too, between the government and the army on how to handle the Taliban.

The government insisted on peace talks but eventually the army launched an offensive.