A joint session of parliament is under way in Pakistan as Prime Minister Nawaz Sharif tries to rally support against the protesters calling for his resignation. 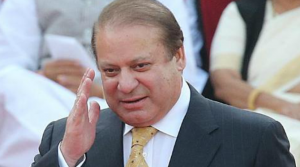 The session, which is expected to continue for a week, comes a day after supporters of opposition leaders, politician Imran Khan and religious leader Tahir-ul-Qadri, briefly occupied state TV building in the capital, Islamabad. Broadcast was resumed after paramilitary soldiers cleared the building.

Speaking in parliament, Interior Minister Chaudhry Nisar Ali Khan said that the “protesters were trained terrorists” and “were armed with weapons and lethal tools”.

Khan and Qadri have been calling for the resignation of Sharif over allegations of vote rigging in the last year’s general elections won by Sharif’s party.

But Khawaja Asif, Pakistan’s minister of defense, has said that the prime minister “will never resign come what may”.

The military’s press department issued a statement on the same day, denying rumors reported on local media that the army chief had asked PM Sharif to resign. The statement described the army as an “apolitical institution” that did not take sides in the political stalemate.

Protesters have been attempting to storm the prime minister’s official residence since Saturday night, prompting an outbreak of violence which has resulted in three deaths and more than 595 people injured, including 115 police officers.

Khan and Qadri have since distanced themselves from the attack on PTV, calling on supporters not to enter government buildings.

Following Monday’s attack, the government has filed paperwork asking for a legal case to be filed against Qadri, Khan and hundreds of their supporters under anti-terrorism laws for inciting their supporters to damage and invade state buildings and attacking security forces.