SYLHET: The poor performance of Pakistan continues in the Women’s World Twenty20 as they lost to Australia by a big margin of 94 runs here at the Sylhet Divisional Stadium on Saturday. 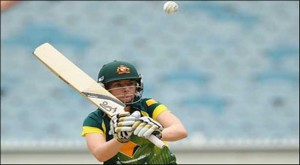 This was third consecutive defeat of Pakistan Women and now they will face Ireland in their last match in Group A.

Australia Women have almost ascertained a spot in the semi-finals. The contest for the second semi-final spot from group A will now be decided when South Africa Women take on New Zealand Women in a virtual quarter-final. If South Africa win, three teams will be tied on six points each and the semi-finalists will be decided by net run rate. If New Zealand are victorious, the Tasman countries will proceed to the next round.

Winning the toss, Australia batted first and openers Alyssa Healy and Elyse Villani put together 61 for the first wicket. Villani anchored the innings after Healy departed and, in the company of Meg Lanning, boosted Australia to a mammoth 185.

The pair added 104 at a scoring rate of nearly 10. Lanning was out in the penultimate over for 50 off 33 balls, but it was Villani’s innings that set Australia up for the win. Her unbeaten 90 came off 54 balls and had six fours and five sixes.

A solid opening stand of 57 off 68 balls was the only bright spot for an otherwise shaky Pakistan. Javeria Khan and Bismah Maroof were also the only batters to score in double figures and Javeria’s wicket in the 13th over was followed by a slide which saw Pakistan limp from 61 for one to 91 for nine.

Sarah Coyte and Ellyse Perry both took three wickets each, while Jess Jonassen finished with two for 14.