Intervention by army comes amid mass protests by top cricketer-turned-politician and a cleric urging PM Sharif to quit.

Pakistan’s powerful military has called for talks to resolve a week-long political drama as tens of thousands of protesters marched on parliament in a bid to depose the prime minister. 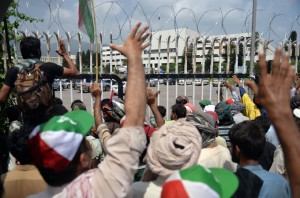 Men, women and children of all ages staged a sit-in outside the parliament building after defying a government ban on entering Islamabad’s “red zone”, which houses key buildings in the capital, including the official residences of the prime minister and the president and foreign embassies.

Meanwhile, Tahir ul-Qadri told his protesting supporters camped outside parliament on Wednesday to allow anyone in or out of the assembly, which is in session with Prime Minister Nawaz Sharif in attendance.

” let all those inside come out and  let anyone go in,” the cleric told his supporters outside parliament in the capital, Islamabad.

Despite the mounting pressure, Sharif’s party said he would not quit, while the army called for a negotiated settlement.

The twin protests led by a famous cricketer-turned-politician and a popular cleric have brought people into the streets, raising fears of unrest in the nuclear-armed US ally with a history of military coups and dictatorship.

He said the government buildings in the so-called red zone were a “symbol of state” and were being protected by the army.

Imran Khan, chairman of the Pakistan Tehreek-e-Insaaf (PTI), and Qadri have led days of protests demanding the resignation of Sharif.

They say last year’s general election was rigged, and have piled pressure on the government, starting with two-day “long marches” from the eastern city of Lahore to Islamabad, where they have held five days of rallies.

The government had banned them from the red zone, but Khan and Qadri defied the call, and soon after midnight on Wednesday thousands of their supporters entered the high-security area, using cranes to remove shipping containers put in place to seal off the area.

Khan has called on demonstrators not to enter Parliament but warned he would lead his supporters into the premier’s office if Sharif does not step down by Wednesday evening.

“Nawaz Sharif, I will wait for your resignation until tomorrow evening and after that, we will enter inside the prime minister’s house,” Khan said, calling on his supporters to gather at 4pm [11.00 GMT] on Wednesday.

Qadri, however, distanced himself from Khan’s call, saying his supporters would maintain a peaceful sit-in until Sharif resigned.

“We will stay here until the sun of revolution rises and a national government is formed,” Qadri said after reaching the parliament building early Wednesday.

Tribune’s Syed nabeel, reporting from the capital, said that there is a lot of tension in Islamabad and some sort of conclusion in the next 48 hours may occur.

“The last thing anybody wants to see is a direct military intervention. However, it appears that within the next 48 hours there will be some sort of conclusion. Even though between now and then there will be high anxiety and of course apprehensions as to what is going to unfold in Islamabad,” he said.

On Tuesday, the government doubled the contingent of soldiers guarding sensitive buildings in the red zone to 700.

Despite fears of violence, there were no major clashes as the protesters entered the red zone on Wednesday, with security forces standing off and the government pledging restraint.