Military to act as “guarantor” as politician Imran Khan and cleric Tahir-ul-Qadri continue to call for PM’s resignation.

Islamabad, Pakistan – The military has intervened in Pakistan’s ongoing political crisis, playing the role of mediator between the government and opposition figures calling for Prime Minister Nawaz Sharif’s resignation over alleged voter fraud and government inefficiency. 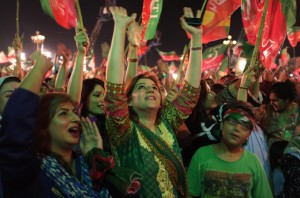 Imran Khan, the leader of the opposition Pakistan Tehreek-e-Insaf (PTI), and Tahir-ul-Qadri, a Canada-based anti-government cleric, have led separate protest sit-ins of thousands of demonstrators in Islamabad since August 14, calling for Sharif to resign.

Late on Thursday night, both men separately met with Army Chief General Raheel Sharif (no relation to Nawaz) to discuss their demands, the military’s spokesperson confirmed, after earlier talks with the government repeatedly broke down.

The prime minister had met with General Sharif earlier on Thursday, the latest in a series of meetings between the two.

Khan and Qadri had earlier told their supporters that they had accepted the army’s role as “guarantor” and “mediator” in the crisis.

The military has frequently intervened in politics in the past, carrying out repeated coups against elected governments to rule Pakistan for roughly half of its 67 years of independence.

The last such intervention took place in 1999, when then-army chief Pervez Musharraf deposed PM Sharif and ruled the country for nine years.

Khan has alleged that Sharif’s PML-N party engaged in widespread voter fraud in the country’s 2013 general election, in which the PML-N won 189 out of a possible 342 seats.

Qadri and his supporters, meanwhile, reject the country’s current system of governance, and the cleric has called for the elected government to be dismissed and replaced by an appointed government of technocrats, who would then rewrite the constitution.

Khan is due to address his supporters at the protest site outside the country’s parliament at 6pm (13:00 GMT) to update them on the talks.

Speaking shortly after his meeting with General Sharif, Khan said that he was prepared for a judicial commission to investigate his allegations of vote rigging, but that he would not accept that commission’s findings as long as Sharif remained in office.

“As long as Nawaz Sharif is the prime minister, there will not be an independent or impartial investigation,” he told supporters.

Speaking to Al Jazeera, Asad Umar, a member of the PTI’s negotiating team, said that his party had accepted the army’s role in the crisis “because the government is simply unable to come to a political solution”.

“Whatever decision is taken, however, it will have to be within the bounds of the constitution,” he said.

Speaking on the floor of the national assembly on Friday, PM Sharif struck a defiant figure, refusing to step down and asserting his party’s constitutional mandate to rule.

“I have taken an oath under the constitution, it is my view that … it is my responsibility and obligation to uphold every letter of that resolution,” he said, referring to an August 21 resolution passed by the National Assembly that rejected the “unconstitutional” demands of Khan and Qadri.

Earlier, on Thursday, the government ordered police in Lahore to register a murder case against PM Sharif and 20 others in a case relating to the killing of 11 Qadri supporters by police on June 17.

The registration of the case had been a key demand of Qadri’s Pakistan Awami Tehreek (PAT), but Qadri rejected the move, saying the case did not contain a full list of suspects and neither did it charge them under anti-terrorism laws, as he had demanded.