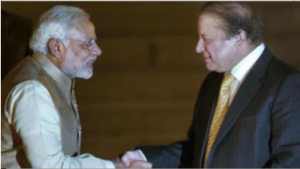 Tuesday’s meeting, which Sharif described later as “good and constructive” and held in “a warm and cordial atmosphere”, was the first time the prime ministers of the South Asian neighbours had held talks since 2002.

Sharif also became the first Pakistani prime minister to attend an Indian prime minister’s inauguration since the subcontinent’s partition in 1947.

In an official statement, Sharif announced that the two countries’ foreign secretaries “would be meeting soon, to review and carry forward our bilateral agenda, in the spirit of our meeting today”.

He also said he pointed out to Modi that “we were at the beginning of our tenures, with a clear mandate. … The one and a half billion people of the two countries want us to focus on their well-being and welfare”.

For his part, Modi said India and Pakistan could immediately move towards normalising trade ties.

After Monday’s inauguration ceremony, Modi said in a series of statements on Twitter: “Nawaz Sharif ji told me that he stays in Islamabad but goes to meet his mother once in a week.

“This time when he was eating with his mother, he saw visuals on TV of my mother offering me sweets. The visuals touched both Nawaz Sharif ji and his mother. He told me that after seeing the visuals, his mother got very emotional.”

The meeting in Delhi “allows Modi to shed his hardline image and emphasise his desire to be seen as a statesman with the gravitas that comes with the office of prime minister of India”, Bharat Bhushan, Delhi-based political commentator and founding editor of India’s Mail Today newspaper, told Al Jazeera.

Sharif was one of six regional leaders who attended Modi’s swearing-in ceremony on Monday evening.

While the outcome of the Delhi meeting has been positive judging by initial accounts, Modi’s decision to invite Sharif caught the Pakistanis by surprise, says Fahd Husain, news director for Pakistan’s Express News Network.

The Pakistanis took their time to go over the pros and cons of going to India, but when the decision to go was made, the response was positive, Husain told Al Jazeera from Lahore, Pakistan.

Likewise, Cyril Almeida, a journalist for Pakistan’s Dawn newspaper, believes the Indian invitation put the Pakistan government in a quandary.

“When the invitation came, it flummoxed the Nawaz Sharif camp,” Almeida says.

“But Sharif bit the bullet and may yet salvage the situation.”

In an interview with India’s NDTV, Sharif, who won Pakistan’s election last year, said Modi’s arrival in power after a landslide election victory represented a “great opportunity” for the countries to open a new chapter in relations.

“This is a chance to reach out to each other. Both governments have a strong mandate,” he said.

Sharif promised to pick up the thread of a failed peace process which went on during his second term in office – coinciding with the last time Modi’s party, the BJP, was in power in India.

In 1999, Atal Bihari Vajpayee, then India’s prime minister, rode a bus to the Pakistani city of Lahore to sign an accord with Sharif.

However, three months later the neighbours nearly went to war over Kashmir.

Pervez Musharraf, the army general who deposed Sharif in a military coup in 1999 and became Pakistan’s president, met Vajpayee during the Agra summit in 2002.

Fifteen years later, Sharif is back in power and so is Vajpayee’s BJP – this time led by Modi, the former tea vendor from Gujarat who is now the most powerful man in India.

“Right-of-centre parties such as the BJP are always more successful at pursuing peace the world over as nobody suspects their nationalism,” Bhushan, the Indian political commentator, told Al Jazeera.

He says Modi also has the advantage of a strong mandate, something the Congress party did not have.

India and Pakistan have fought several wars, three of which have been over the divided region of Kashmir.

Relations dipped to new lows in November 2008 when an armed group from Pakistan killed 166 people in Mumbai, India’s commercial hub.

Modi told Sharif to crack down on fighters operating in Pakistan, while stressing his desire for better relations and trade, the Indian Foreign Ministry said on Tuesday.

While Sharif’s visit has attracted attention and positive reviews in both countries, it is unclear if it will have any significant long-term impact on relations between India and Pakistan.

Bhushan is more cautious when it comes to rapprochement between India and Pakistan.

“We must not front-load the prime ministership of Narendra Modi with high expectations of peace with Pakistan,” he says.