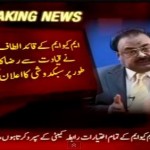 “Metropolitan police raided one of my houses in London. When the home of a person who is also the political leader of millions of people is subjected to a raid by law enforcing agencies, then it becomes imperative for him to step down”, said he talking exclusively to Geo News.