The excitement is still on as Eid Festival to be held on Tuesday at Sydney Olympic Park   Sydney (Report by Sarwat Hassan); It was the best ever Chand Raat in Australia which made history when remarkable 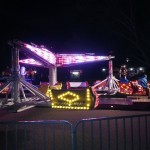 Hall, Coburg (Melbourne). More than 25 thousand people in both cities were very well connected with great fun, joys, entertainment, traditional shopping and eating on the ending of Holy month of Ramadan. As the gates opened at 5pm people were already in queuing found desperate to go in, about 7pm Rosehill Gardens were packed with people everywhere. The entertainment show, commenced just after the Iftaar (breakfast), were the centre of attraction. Chinese Lion Dance, Turkish Folk Dance, Persian & Pustoon singing, people standing in long queues in front of delicious food stalls and children riding on thrilling rides were showing live over 150 screen at various locations of Rosehill Gardens, all the coverage was watching by the people demonstrating the same level of excitement of Chand Raat at Coburg Town Hall in Melbourne. The excitement of the people of Sydney elevates further and people are anxiously waiting to go to the Eid Festival being