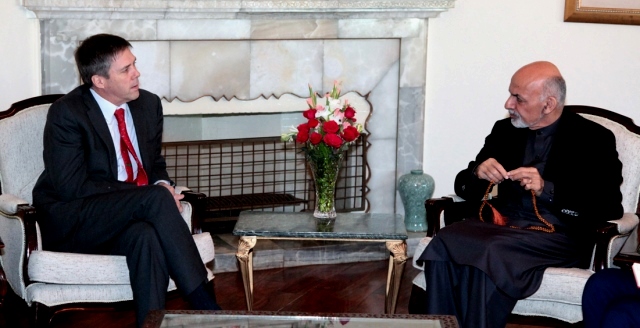 KABUL — President of Islamic Republic of Afghanistan, Mohammad Ashraf Ghani received the outgoing Australian Ambassador to Kabul, John Philip and lauded his contribution for Afghan-Australian relationship.
During the meeting that took place on December 9, 2014 in Kabul President Ghani thanked the Australian support to Afghanistan over the last 13 years.
The President Ashraf Ghan, wishing success to Ambassador John in his future career, appreciated his good will, positive judgment and understanding towards Afghanistan, and his efforts during his tenure in enhancing relations between the two countries. In return, Ambassador John described Afghanistan as a country of importance to Australia; and, expressing pleasure for having served in Afghanistan, wished success to President Ghani and the new government of Afghanistan in all fields, reforms program in particular.
In his farewell message Ambassador John Philp said: “I am genuinely sad to be leaving Afghanistan at such an important time for its future. Over the two years that I have served here, I have seen remarkable developments, including a peaceful national election culminating in the first democratic transfer of power from one President to another.”
Ambassador John Philip assured that Australia was committed to helping Afghanistan” and recalled that “during my time here we’ve made a substantial contribution to international efforts to stabilise and rebuild Afghanistan.”
He also commended the Afghan people for their remarkable spirit as they work together with Australians to build a peaceful and prosperous future. – PPA