ISLAMABAD: A committee formed by the Pakistan Electronic Media Regulatory Authority (Pemra) has suspended the licences of three television channels owned by the Geo TV network.

The committee has also ordered that Geo TV offices be sealed. 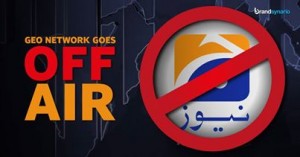 However, a final decision on the revocation of the licences will be announced following the meeting on May 28, which will also be attended by government representatives.

The committee, which includes members Syed Ismail Shah, Pervez Rathore and Israr Abbasi, was tasked to review the Ministry of Defence’s application filed against Geo TV network for leveling allegations against an intelligence agency of Pakistan.

Speaking to reporters in Islamabad, members of the committee announced that they have decided to suspend the licences of the three channels — Geo News, Geo Entertainment and Geo Tez — with immediate effect.

“All members (present) today unanimously decided that the licence for Geo News be cancelled. However, due to a legal formality that could not be completed, we have sent our recommendations to the Council of Complaints, advising that they respond before May 28, the date for our next meeting,” said Mian Shamsur Rehman, a member of the committee.

Pemra member Israr Abbasi said that one-third members were present during the meeting today, whereas government member did not attend the meeting.

The suspension is to stay in effect until May 28, when another session of the committee will be called to decide on the final decision regarding cancellation of the licences.

“On May 28 during our next meeting, we will give a final decision on (cancelling licences of) Geo News, Geo Tez and Geo Entertainment,” said Shamsur Rehman.

Pemra member Israr Abbasi said there were members representing the public and the provinces at the meeting which resulted in the suspension of Geo News, Geo Tez and Geo Entertainment.

Speaking to a private TV channel, Abbasi added that in the next meeting the legal process against Geo would be decided upon, and until then, the group’s licenses will remain suspended.

He said that there was no need to refer this decision to the law division as Pemra has been given the authority to take such a decision.