Illegal loggers who had tried to expel Edwin Chota from tribal lands suspected in murder in remote border region.

An outspoken Peruvian opponent of illegal logging and three other native Ashaninka community leaders have been shot and killed in the remote region bordering Brazil where they live, villagers and authorities say.

The activist, Edwin Chota, had received frequent death threats from illegal loggers, who he had tried for years to expel from the lands for which his community was seeking title, Associated Press news agency reported on Tuesday. 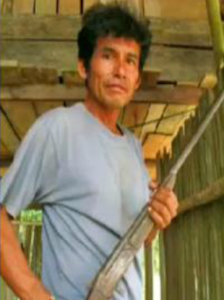 “He threatened to upset the status quo,” said David Salisbury, a professor at the United States’ University of Richmond who was advising Chota on the title quest and had known him for a decade.

“The illegal loggers are on record for wanting Edwin dead.”

In a separate interview with private media, Salisbury said Chota was “very aware of the dangers that he lived in, and he had tremendous courage to keep fighting for his people”.

Chota and the others were apparently killed on September 1, the day they left Saweto, the village he led on the Upper Tamaya river, to hike to a sister Brazilian Ashaninka community, said the village schoolteacher, Maria Elena Paredes.

When the men did not show at the Brazilian village, worried comrades who had traveled before them returned and found the bodies, apparently killed by shotgun blasts, near some shacks on the Putaya river, Paredes said.

She said by phone that vultures had begun to feed on the bodies, which were found a six-hour walk from the 45-inhabitant village.

Paredes identified the other slain men as Jorge Rios, who was Chota’s deputy, Leoncio Quinticima and Francisco Pinedo.

Peru’s main indigenous federation, AIDESEP, expressed outrage at police and the judiciary in a statement for “doing absolutely nothing despite repeated complaints” to protect the slain men, who it said had joined “the long list of martyrs who fell in defense of their ancestral lands.”

Patricia Balbuena, Peru’s deputy minister for intercultural affairs, said authorities planned after police debrief the delegation to fly by helicopter to Saweto to investigate and retrieve the bodies.

Chota had campaigned for years for the title for his community, emboldening other settlements along the Tamaya to similar seek legal claim to traditional lands, said Sebastian.

Now, he said, people in those communities fear for their lives.

“We have been fighting for 12 years and now look what happens,” said Paredes.

Sebastian said he would demand a meeting with President Ollanta Humala to obtain assurances for his people’s safety.

The Ashaninkas are Peru’s leading Amazon ethnic group and Sebastian says violence against them has been rising since they began agitating for titles to their territories.

Chota’s region is home to about 80 percent of illegal logging in Peru, which thrives on a web of corruption involving the widespread issuance of counterfeit logging permits.

The wood from a single old-growth mahogany tree can fetch more than $11,000 on the US lumber market, the Environmental Investigation Agency nonprofit said in a 2012 report on Peru’s trouble forest concession system.