Kiwis, Indians, Chinese and English are the biggest migrators to Australia

Australians born outside the country now represent 28 per cent of the population. Australian Bureau of Statistics says around 28 percent or 6.6 million residents currently living in Australia were born overseas, making the population proportion the highest in 120 years.

Australia’s migrant population is highest in 120 years, not seen since the late 1800s which transformed a former convict colony into a first choice destination for immigrants from around the world. “Australia traditionally had a high proportion of migrants, but we’ve now hit a peak not seen since the gold rushes of the late 1800s,” ABS spokeswoman Denise Carlton said.

More than 1.2 million UK-born people call Australia home and are the biggest migrant group in the country, according to the Migration Australia 2013-14 report released by the Australian Bureau of Statistics (ABS).

New Zealanders were the second biggest migrant group, with 617,000 living Down Under as of June 2014.

China is another big mover – and one of Australia’s biggest populations. Since 2004, the number of Australian residents who were born in China has more than doubled, to a total of 447,400 in 2014.

Multicultural Communities Council of NSW chair Doctor Anthony Pun OAM said Australia was an attractive place for Chinese people because of a different way of life.

“I think it’s the attraction of a different way of living and different political systems. I think the weather plays a big role in this too because the Australian weather is very, very nice. The air is clean and I think from the point of view of the environment that we’re living in, we’re much better off than in China”.

Indian-born Australians were the fourth-biggest migrant group, tripling since 2004 to become 1.7 per cent of the Australian population.

Countries included in the top 10 were the Philippines, Vietnam, Italy, South Africa, Malaysia and Germany. 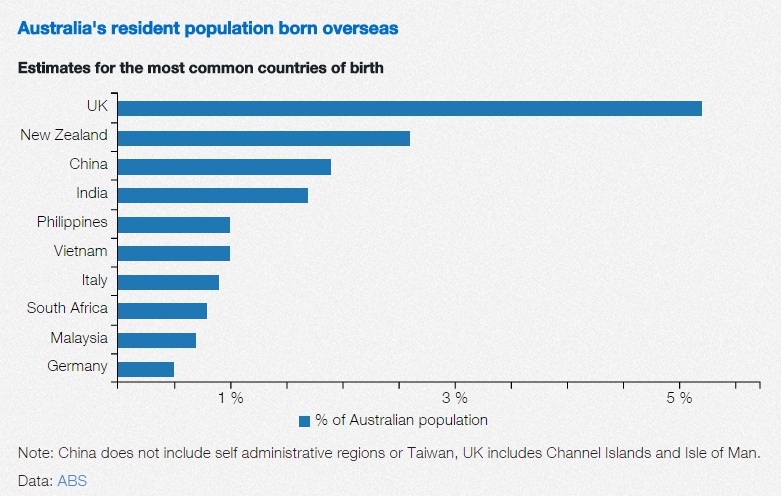