President Obama has made history by winning the second term as the Afro-American president. His re-election as the president of the United States offers an eloquent and incontrovertible testimony to the magnificent democratic culture that this great country nurtures. There were colliding claims and divergent conjectures by the respective contenders and their supporters about the ensured success of their party 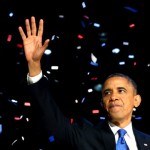 But obviously it is only one candidate that comes on top and wins the laurels. That is President Barack Obama who scored a stunning victory that would enable him to continue his agenda of rehabilitating United States. His paramount priority by all reckoning would be to rekindle the smoldering economy and put new vitality and strength into it. That is the most outstanding pledge that he has held out to the Americans and which he must fulfill.

If economy is revitalized, the country would move forward in diverse disciplines. A healthy and robust economy would animate auto industry. It would be instrumental in creation of jobs, stabilizing the shaky social security system, modernizing the stagnant and funds-starved education system, providing affordable healthcare, bolstering the stalled research work and creating modern infrastructure like highways and bridges.

In a divided Congress whose two horns are caught by two ideologically hostile parties, the fulfillment of president Obama’s ambitious agenda for turning a new leaf and bringing back the economic grandeur and refurbishing the bruised image of America as a war monger may look a tall order.

The United States’ most urgent priority is to re-calibrate its external and internal rudder to maintain its stature of the world leader both economically and militarily albeit through goodwill and peaceful means. Besides, he has to reduce the deficit, reform the tax code, and lessen dependence on imported oil and streamline the messy immigration system.

The marvelous acceptance speech of the triumphant president provides a clue to what could be his vision with regard to a new world order under the American aegis. It surmises from his address that he intends to lessen American involvement in wars and military conflicts around the world. That is a spectacular and long overdue call, finally echoed by a president who has come to the stark realization that it was time to make this war afflicted planet an abode of peace and global fraternity.

While America’s military would remain supreme and second to none, it would be employed sparingly, needed to disengage the combatants or to restore peace in hot spots. Henceforth, hopefully, the American military might not be marshaled as an instrument of fomenting or promoting the ideological or colonial wars. In the backdrop of counterproductive military invasions of Afghanistan and Iraq, the United States may desist from sending its forces for mere adventures or to flex its military muscle or to fix the rogue states.

Perhaps the time is up for America to annihilate and invade the countries that would not be in the American camp or that would be aloof in serving the American interests in distant lands. For America and for the new pacifist  president it is time to win the hearts and minds of the international community even  ideological foes as  socialism or communism.

The world in moving into a tough competition focused on the technological breakthroughs and economic advancements. For that laudable end, domestic and international peaceful environment and cordiality is indispensable. The other compelling factor that would impel America to wind up its military maneuvers and stationing of forces aboard is its all time high debt of 16 trillion dollars. This staggering debt would take half a century to be wiped off or curtained. Ironically America as the monarch of the capitalist world happens to be the most indebted nation.

These are daunting challenges and gubernatorial thorny  issues within America that need a break from the military spending and instead boosting of economy so that the American people can be saved from  falling into poverty spiral. A sagacious approach and bold new vision is imperative to maintain the social safety nets and benefits that help people to put food on the table, get medical care when sick, less expensive gas for their automobiles and afford education to the highest level.

American people are not used to nor would accept the austerity measures that have been lately introduced in countries with dwindling economies. One can witness an economic tsunami overtaking the western countries notably France, Spain, Italy, Greece and swallowing their economic potential and viability as social welfare societies.

If the economic Magna-Carta of reforms is not unfurled in United States by concurrently keeping the present level of social comforts, this country would too come under the crunch of an economic stagnation and lowering quality of life.  That would be bleak trend for country that has been maintaining its lead in prosperity, economic ascendancy and supremacy in military power.

America has lost countless soldiers in military conflicts starting from the WWII to the present rife in Afghanistan. The number of veterans including the disabled has reached 29 million. Eradication or bracing against the global terrorism should not be only American problem. It has assumed global proportions and therefore becomes the collective responsibility of the international community to be dealt with. Invasion and occupation of countries accused of hosting terrorist bands has proved to be immensely flawed.

Starting an economic war with China that has been one of the outstanding trade partners of the United States abruptly, would be harmful. It would lead to collateral damage at least till such time that a network of local small and medium sized industries is created within America. The Chinese cheap goo especially one dollar items flooding the American markets cannot be locked so soon.

If there is no replacement of the inexpensive merchandise from China, there would be a vacuum domestically. The people will have to buy local products that would be several times more expensive. China is incidentally the biggest lender to United States and any knee jerk reactions would adversely boomerang.

However, curtailing or winding up of overseas American industries or outsourcing is what the Obama administration must take up without loss of time. Outsourcing is double edged source. It has deprived America of the creation of domestic jobs and investment that go abroad and make other countries prosperous at the cost of the local industries.

Moreover, under the guise of outsourcing incompetent and unwanted workforce is pushed into America by the outsourcing companies and private manpower cartels, by taking graft money from most of them. This hoax must stop and the establishment of industries in foreign lands must stop or done with extreme caution to obviate the loss of jobs for the American at home.

The United State must not penalize Iran by way of stringent sanctions that have disastrously affected the people of Iran. For instance the life saving drugs are scare in Iran causing loss of life in that country. This is a humanitarian issue and any embargo on export or import of food items, or medicines ought not to be banned by United States and the international community. Iran is ready to talk on her controversial nuclear program and if the talks bear fruit then the crippling sanctions must be lifted.

The winding up of wars by President Obama is most admirable step that would gradually end the long drawn spell of sufferings for both Iraqi and Afghan people. While the wars are coming to a close in both these war tone countries, there is no wisdom or justification for starting another war in the Middle East to nail down Iran.

The Arab spring that was spearheaded by the people of the respective countries and supported and sustained by the Western countries and more specifically America must continue to expand further.  Gradually, the entire region of the Middle East would be  blessed with representative and popular dispensations as in Egypt and Tunisia although still in their infancy, The democratic culture would consolidate and take roots over a period of time and not so soon. We must be patients and bear with the emerging patterns of liberty, freedoms, human rights, empowerment of the people and shaping up of mutually integrated peaceful world community.

The United State bears the paramount responsibility to make this dream come true as she possesses the necessary resources and power to lead the humanity towards a better future, global peace and universal prosperity. With determination and sincerity this milestone can be achieved. (By Saeed Qureshi; The writer is a senior journalist and a former diplomat.).