When Asif Ali Zardari visited Quaid’s tomb after he was elected as the President of Pakistan, he wrote some interesting comments on the visitor’s book. The comments were so inspiring that the agencies had to rush in at odd hours to change the page and the comments. According to Ardesher Kausjee, the president spelled the word God as ‘Goad’. The president’s oratory capability shined when Sarah Palin called on him at a hotel in Washington DC. 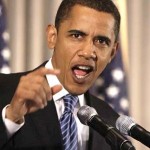 What I am trying to say, is, the formal written and spoken words of a head of state should be focused and should carry meaning.

A typical example is Barack Hussain Obama. It is known that he writes his own keynote speeches or when speeches are presented to him as drafts, he amends them according to his astute understanding. So whether it is the ‘spiritually-inspired’ (that’s what he considers himself) Zardari or business-minded Obama, when a head of state writes or speaks at formal occasions every word he utters carries significance. No word is out of place or meaningless. I learnt this fact when I attended international meetings as part of Pakistan’s delegations on health at Geneva and elsewhere in the world.

Listening to Obama’s victory speech the other night, he intelligently linked ‘hope’ with ‘actions’ projecting four important points with the latter;

Although all the above-mentioned points were directly or indirectly linked to the economy, the fourth point however carried a strong message to the oil producing countries such as Saudi Arabia. We all know that two major problems face the Americans; the economy and terrorism. After 9/11, terrorism has been linked to a particular sect of Islam spearheaded by Saudi Arabia. As long as the Americans rely on oil from Saudi Arabia, the strong stand the US government can take against terrorism will keep blunted thus compromising its foreign policy.

America cannot turn to Iran because of strong opposition from Israel and Saudi Arabia. Obama and Netanyahu personally do not like each other as it was revealed last year by a ‘off the record’ chat that was leaked to the media by mistake. But when it comes to policy matters, Obama cannot annoy Israel because of deep infiltration of Jewish lobbies in the political fabric of American society. Similarly, he cannot distance himself from Saudis because American economy heavily leans on oil. The American researchers are actively involved to find alternate sources of energy. Was he hinting about success in that direction in his fourth point? As I mentioned earlier when a president speaks each word carries meaning.

Otherwise, the particular sect linked with terrorism in the Muslim countries is nurtured by Saudi Riyal and supported by the wealthy and powerful Saudis. Some people believe that members of the of the royal family might be behind it all. As opposed to this, there are other sects of Islam such as Sufis and Shias, which are against the rigid and harsh policies practised by that particular sect. But as the present regime in Saudi Arabia stays in power, compromises will be made by the American hierarchy on curbing terrorism in America and for that matter across the globe.

So when Obama said that ‘the decade of war is ending’ and ‘the economy is recovering’; is the war (war on terror) really ending? Some analysts predict the war on terror will continue for another three to four decades. And as the war continues can the American economy really recover?

His speech was passionate and forceful, especially when he talked of ‘shared destiny’, which according to him, came with ‘responsibility, love, charity, duty, patriotism’ and which made the US strong and proud. He made his ‘healthcare plan’ appealing to the ordinary Americans when he linked it to a 8 year old girl suffering from leukaemia whose father could not afford to treat her because of high cost. He said, his healthcare plan protected her health and reduced the unbearable and unavoidable financial burden on her father.

As I was listening to Obama choosing his words carefully with focused intention and giving a strong message to the Americans and the leaders across the world, I could not stop comparing him to the political leaders of Pakistan in values, honesty, charisma and sincerity. I came to the conclusion that leaders are known by the nations they lead and nations are known by the leaders they choose. We are at loss in both aspects in Pakistan. Looking at Obama again, I asked myself how many decades will it take for our nation to grow and chose a leader of integrity, honesty and uprightness? An answer flickered in my mind saying probably not in my lifetime. Was it despondency scratching my feelings or reality tickling my enthusiasm, I guess I will never know. (By Dr. Ghayur Ayub, London).