US president downplays Russia’s role in the world, saying Vladimir Putin’s actions will hurt country in the long-term.

Barack Obama, the US president, has dismissed Russia as a nation that “doesn’t make anything” in an interview with the Economist  magazine. 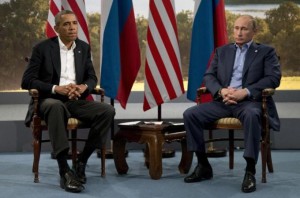 Obama downplayed Moscow’s role in the world, saying that Vladimir Putin, Russia’s president, was a leader causing short-term trouble for political gain that would hurt Russia in the long term.

“I do think it’s important to keep perspective. Russia doesn’t make anything,” Obama said. “Immigrants aren’t rushing to Moscow in search of opportunity. The life expectancy of the Russian male is around 60 years old. The population is shrinking.”

Speaking of what he called Russia’s “regional challenges,” Obama said: “We have to make sure that they don’t escalate where suddenly nuclear weapons are back in the discussion of foreign policy.”

Obama described US tensions with China as “manageable.” China is engaged in territorial disputes with its neighbors in the oil-rich South China Sea, and frequently skirmishes with the West over intellectual property issues.

“One thing I will say about China, though, is you also have to be pretty firm with them, because they will push as hard as
they can until they meet resistance,” Obama told the Economist .

“They’re not sentimental, and they are not interested in abstractions. And so simple appeals to international norms are insufficient,” he said.

Obama said he believes trade tensions will ease when China shifts “from simply being the low-cost manufacturer of the world” and its companies begin making higher-value items that need intellectual property protections.

“There have to be mechanisms both to be tough with them when we think that they’re breaching international norms, but also to show them the potential benefits over the long term,” he said.