RIYADH: US President Barack Obama met a Saudi women’s rights activist on Saturday, the same day women have pledged to defy a driving ban, as he wrapped up a reassurance visit to the longtime ally. 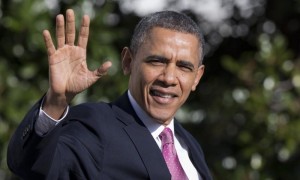 In talks with King Abdullah late on Friday, Obama told his host their two countries remained in lockstep on their strategic interests despite policy differences over Iran and Syria.

But despite appeals from US lawmakers, Obama did not raise the issue of human rights, a senior US official said, instead scheduling Saturday morning’s meeting with Maha Al-Muneef, a prominent campaigner against domestic violence in the ultra-conservative Muslim kingdom.

Muneef was one of 10 women honoured by the US State Department this year for bravery, and Obama took the opportunity to hand her the accolade in person after she was unable to attend an awards ceremony in Washington earlier this month.

Muneef founded the National Family Safety Programme in 2005 to campaign against domestic violence in Saudi Arabia, where activists have long demanded an end to the “absolute authority” over women of their male guardians.

Obama posed with Muneef for photographers, as he praised her efforts “to persuade many that this is an issue that is going to be important to the society over the long term.”

Their meeting, shortly before Obama flew home to Washington, came as Saudi activists called for a new day of defiance of the kingdom’s ban on women driving.

Activist Madiha al-Ajroush told AFP the protest had not been deliberately timed to coincide with Obama’s visit. “We have fixed a day every month to pursue our campaign,” she said.

The action is part of a campaign launched on October 26, when 16 women activists were stopped by police for defying the ban and required to sign pledges before being released not to do so again.

Amnesty International had urged Obama to take a strong stance on the issue during his visit by appointing a woman chauffeur and meeting activists.

“Under its restrictive guardianship system, women need the permission of a male guardian to get married, travel, undergo certain types of surgery, accept paid employment or enrol in higher education,” the London-based watchdog said.

Dozens of US lawmakers had also called on Obama to publicly address Saudi Arabia’s “systematic human rights violations”, including its ban on women drivers.

The US official said the administration shared many of the concerns but Friday’s meeting was dominated by the three-year-old conflict in Syria and Saudi concerns about Iran.

But “given the extent of time that they spent on Iran and Syria, they didn’t get to a number of issues and it wasn’t just human rights.”

Saudi Arabia has strong reservations about efforts by Washington and other major powers to negotiate a deal with Iran on its controversial nuclear programme.

The Sunni Muslim oil kingpin, long wary of Shia Iran’s regional ambitions, views a November deal between the powers and Iran aimed at buying time to negotiate a comprehensive accord as a risky venture that could embolden Tehran.

A supporter of the Syrian rebels, Riyadh was also deeply disappointed by Obama’s 11th-hour decision last year not to take military action against Tehran ally Damascus over chemical weapons attacks.

Obama sought to reassure Abdullah on both issues in Friday’s meeting, telling the king that the strategic interests of the United States and its longtime ally remained “very much aligned”, the US official said.

US officials shot down as untrue reports that Washington was planning to give Riyadh a green light to arm mainstream Syrian rebels with shoulder-fired ground-to-air missiles, known as Manpads, as a deterrent against regime air strikes.

“We have not changed our position on providing Manpads to the opposition,” an administration official said, saying it posed “a proliferation risk” as the weapons could fall into the hands of jihadists.