KUALA LUMPUR: US President Barack Obama arrives Saturday in Malaysia hoping to energise aloof ties with a Muslim-majority nation whose government is under the microscope for wide allegations of abuse of power and the loss of Malaysia Airlines flight MH370.

Obama becomes the first serving US president to visit since Lyndon Johnson in 1966 as he tours Asia to fortify alliances amid concern over China´s rise and push his troubled plans for a Pacific-wide trade pact. 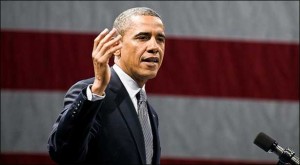 Washington is keen to emphasise its relations with economically successful, moderate-Muslim Malaysia as the United States battles image problems in the Islamic world.

But Malaysia is a close trading partner of China and has resisted key aspects of Obama´s Trans-Pacific Partnership agreement on trade.

Obama also will have to tread a fine line between courting Prime Minister Najib Razak while acknowledging huge segments of society in multi-cultural Malaysia that are fed up with his corruption-plagued coalition which has been in power for 57 years.

Najib craves acceptance abroad, where he portrays himself as a reformer and religious moderate.

But the reality is one of a “corrupt and authoritarian regime,” opposition leader Anwar Ibrahim said in a statement Saturday that urged Obama to voice support for “freedom and democracy” in Malaysia.

“It would be an opportune moment to live up to the ideals Obama espoused in his campaign and the early days of his administration,” Anwar said.

Najib´s government has come under growing criticism for harassing opponents and stifling free expression, particularly after elections last year in which it lost the popular vote to Anwar´s opposition.

Najib clung to power via what critics say is a skewed electoral system favouring his coalition.

After his visits to Japan and South Korea, Obama is due to arrive in Malaysia late Saturday afternoon.