US president meets with Petro Poroshenko in Warsaw in show of support amid Ukraine’s continuing crisis.

US President Barack Obama has met Ukraine’s president-elect Petro Poroshenko in a show of US support as the country battles a pro-Russian uprising that the West blames on Russia. 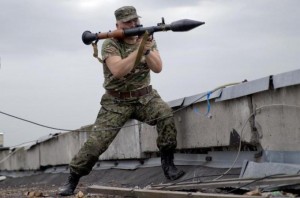 Obama sat down with Poroshenko in Warsaw on Wednesday during a trip designed to assuage security concerns in eastern Europe following Russia’s annexation of Ukraine’s Crimean peninsula in March.

The leaders discussed a plan for reducing Ukraine’s energy dependence on Russia, ways of restoring peace in the east of the country and rescuing Ukraine’s collapsing economy, Reuters news agency reported.

“The United States is absolutely committed to standing behind the Ukrainian people not just in the coming days, weeks, but in the coming years,” said Obama after the meeting.

“We will never accept Russia’s occupation of Crimea or its violations of Ukraine’s sovereignty,” he said.

The talks on day two of his European tour came before the US president heads to a G7 summit in Belgium which aims to cement Western policy towards Russia.

On Tuesday, Obama said “further Russian provocation will be met with further costs for Russia including, if necessary, additional sanctions”.

In an interview with the French TF-1 TV channel published on Wednesday, Russian President Vladimir Putin accused Washington of “the most aggressive” actions on the international arena.

“It is no secret that the most aggressive, the most rigid policy on protection of own interests, as understood by the US administration, is pursued exactly by the US, year in, year out,” Putin said.

“We have barely any troops abroad, whereas the US has troops everywhere, it has military bases all over the world, and everywhere they participate in deciding the fates of other nations that are thousands of miles away from their own borders.”

The accelerating diplomacy over Ukraine comes as a seven-week uprising in the eastern regions grows more violent every day after Poroshenko swept to power in a May 25 presidential vote.

Ukraine’s National Guard said on Wednesday that its forces had abandoned a military outpost in the eastern city of Luhansk after running out of ammunition in a 10-hour battle with pro-Russian separatists.

Officials said in a statement that six rebels were killed and three Ukrainian servicemen were injured in fighting overnight.

A day earlier, Ukrainian troops launched an offensive against rebels in the eastern city of Slavyansk.

Seleznyov put the death toll of the rebels at 300 but the separatists did not confirm the reports.

“Heavy fighting resumed this morning in Slavyansk, which has been a hotspot throughout this conflict. It is a very dangerous situation for the civilians in the city,” she said.

“Pretty much the whole town is cut off. There are blog posts manned by armed pro-Russia separatists. They said all of the roads leading into Slavyansk had [Ukrainian government] snipers looking down on them.”