TOKYO — President Obama arrived here on Wednesday evening to begin a four-country tour of Asia, after first stopping in Washington State to survey the devastation left there by last month’s deadly mudslide. It was a fitting start, given that everywhere on this trip, he will witness the lingering fallout of disasters, natural and man-made. 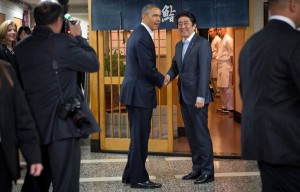 From South Korea, where public outrage is surging in the wake of a ferry accident that has claimed the lives of scores of teenagers, to Malaysia, where the authorities face harsh scrutiny over their handling of a missing jetliner, Mr. Obama will encounter leaders under pressure from angry, often grief-stricken constituents.

In the Philippines, the government has labored to recover from withering criticism of its botched response to Typhoon Haiyan last fall. Even here in Japan, Prime Minister Shinzo Abe was tripped up by the 2011 Fukushima nuclear disaster, faulted last summer for playing down a leakage of highly radioactive water from the plant.

White House officials, who have come with a busy agenda of economic and security issues, worry that the leaders — particularly President Park Geun-hye of South Korea, for whom the ferry tragedy is still unfolding — will be preoccupied when they meet with Mr. Obama.

“The South Korea visit could really be overshadowed by the ferry,” said a senior administration official, who spoke on the condition of anonymity because of the sensitivity of the matter.

That would be a missed opportunity for the South Koreans, who appealed to the White House to add a stop in Seoul when news surfaced last fall that Mr. Obama was planning to visit Tokyo. It will be the president’s fourth trip to South Korea, the most visits he has made in office to any Asian country.

South Korean diplomats are characterizing it as a visit by an old friend — a pointed contrast to his more formal two-day stop in Japan, which includes an elaborate welcoming ceremony at the Imperial Palace, an audience with Emperor Akihito and a state dinner.

Relations between South Korea and Japan have been deeply strained since Ms. Park and Mr. Abe came into office, with the two sides replaying World War II-era grievances. Earlier this month, Mr. Obama brokered a carefully orchestrated meeting between the leaders in The Hague that was meant to clear the air.

On Wednesday night, the president was to be taken to dinner by Mr. Abe to a well-known but tiny sushi bar in downtown Tokyo that seats 10 customers, an unusually informal choice for Japan.

The prime minister has raised hopes in Washington because of his commitment to overhauling the Japanese economy. The United States would like to announce progress, if not a signed deal, in trade negotiations with Japan during the visit, to help bolster an American-led regional trade pact known as the Trans-Pacific Partnership.

While Mr. Abe is perhaps the least distracted of the leaders Mr. Obama will meet — the Fukushima disaster has largely receded — he faces a political fight in convincing Japan’s powerful farmers to open markets in beef and pork, which is critical to reaching a deal.

Japan won a symbolic boost from Mr. Obama when he reaffirmed that a clump of disputed islands in the East China Sea that are at the center of tense standoff between Japan and China are covered under the mutual defense treaty between the United States and Japan.

“We oppose any unilateral attempts to undermine Japan’s administration of these islands,” Mr. Obama said in a written answer to questions from the Yomiuri Shimbun newspaper.

In Seoul, administration officials said, Mr. Obama hopes to increase pressure on North Korea, which has reverted to a pattern of missile tests and other provocative actions. But Ms. Park is likely to be consumed by the desperate effort to find survivors in the sunken ferry.

On Monday, Chosun Ilbo, the largest South Korean newspaper, said in an editorial, “People are descending into a collective sense of powerlessness, unable to trust the government with protecting them in emergency situations.” Ms. Park has characterized the captain’s decision to abandon ship with passengers still trapped below decks as akin to murder.

Mr. Obama faces an even more delicate situation in Malaysia, which his advisers had hoped to celebrate as a reliable partner in counterterrorism operations and a model of a majority-Muslim democracy in Asia. Instead, it has become a byword for confusion and opacity in the wake of the disappearance of Malaysia Airlines Flight 370.

Malaysia’s hapless response, some critics say, reveals deeper problems with its government, which has long been under one-party rule, dominated by a hidebound Malay elite, and has compiled a record of human rights abuses that belies the White House’s upbeat narrative.

With the United States already taking part in the painstaking search of the southern Indian Ocean, there is little more that Mr. Obama can do, except offer solace. He will also try to focus on other issues in what is the first visit to Malaysia by an American president since Lyndon B. Johnson in 1966.

In the Philippines, at least, Mr. Obama will be able to speak openly about the typhoon and offer help for the next storm. He and President Benigno S. Aquino III are expected to sign a deal to expand access to bases for American warships and planes rotating through the archipelago.

Filipinos had long been opposed to a major American military presence. But the response of Marines and ships dispatched from Okinawa, Japan, after the typhoon, at a time that the local authorities were overwhelmed, was a reminder that such an arrangement has some advantages.