Japanese PM says Pyongyang has agreed to reopen probe into kidnapping of Japanese citizens in the 1970s and 1980s. 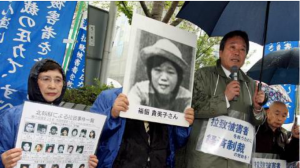 North Korea has agreed to reopen an investigation into the fate of Japanese citizens it kidnapped decades ago, Japanese Prime Minister Shinzo Abe announced in a potential breakthrough in a bitter dispute between Tokyo and Pyongyang.

“Our job will not end until every parent can embrace their children with their own arms,” Abe told reporters on Thursday. “This is a first step toward an overall resolution.”

In exchange, Japan has agreed to ease some sanctions against North Korea once the probe had been reopened, and will consider providing humanitarian aid depending on how the investigation progresses, Chief Cabinet Secretary Yoshihide Suga said separately.

North Korea promised in 2008 to reopen the probe, but it never followed through.

The agreement on the abductees probe comes amid concerns that Pyongyang could be preparing for another nuclear test.

Suga added that Japan would keep pressing for a “comprehensive resolution” to the issues of the abductees and the threats from North Korea’s nuclear and missile development programmes before it would normalise ties.

“We are still at the starting line, but we have never come this far before,” Suga said.

Japan colonised Korea between 1910 and 1945 and the two countries have no formal diplomatic ties.

Abe, who took office for a rare second term in December 2012, has long made efforts to resolve the abductees issue a key part of his political agenda.

“Shinzo Abe has made this a really important foreign policy goal of his,” Al Jazeera’s Harry Fawcett, reporting from the South Korean capil Seoul, said.

Our correspondent also said that the news would likely displease South Korea and the US, which have maintained a hardline stance against Pyongyang.

North Korea admitted in 2002 to kidnapping Japanese citizens in the 1970s and 1980s to help train spies.

Five abductees and their families returned to Japan.

North Korea has said the remaining eight were dead and that the issue was closed, but Japan has pressed for more information about their fate and others that Tokyo believes were also kidnapped.

Suga said that once Pyongyang began the new investigation, Tokyo would lift restrictions on travel, fund remittances to North Korea and an embargo on the entry to Japanese ports of North Korea-flagged ships with humanitarian missions.

Relatives of the kidnapped Japanese welcomed the news, although some said Japan should wait to see results before easing its sanctions.