Nokia is targeting emerging markets with three low-cost smartphones that use Google’s Android operating system rather than the Windows Phone software from Microsoft, which is about to buy Nokia’s phone business. 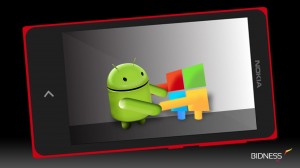 Nokia will ditch many of the Google services that come with Android, which Google lets phone makers customize at will. Instead, the new Nokia X line announced on Monday will emphasize Microsoft services such as Bing search, Skype communications and OneDrive file storage. Its home screen sports larger, resizable tiles resembling those on Windows phone.

“More and more people are buying smartphones for less that 100 euros,” said Stephen Elop, Nokia executive vice president, as he presented the new phones at the Mobile World Congress in Barcelona, Spain. “That sub-100 range is a massive opportunity for us. According to analysts, it will grow four times as fast as rest of smartphone market.”

The Nokia X and X+ both have 4-inch screens, but the X+ offers an SD card.

The XL has a 5-inch screen and a better 5-megapixel camera and a 2-megapixel front-facing camera.

Elop said all three phones will be “available broadly around the world, starting in growth markets.” The aim is to make the Nokia X a bridge to high-end Windows smartphones under the Lumia brand.