Activists on the ground say that a government airstrike has hit a school in Aleppo. The strike killed at least nine people, including three children, (AP). 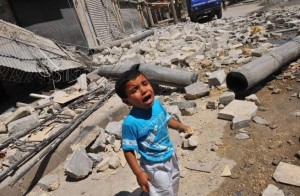 The Syrian Observatory for Human Rights says there was at least one airstrike and the death toll will most likely rise.

Syrian forces are attempting to regain control of rebel-held regions of Aleppo, the country’s largest city, according to AP.

The attack comes as Syria prepares for a presidential election set to take place in June.