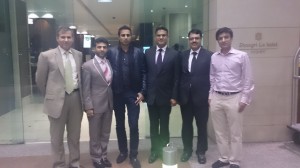 During the event the guests and hosts shared the ideas and planned to work in the best interest of Pakistan through promoting trade relationship between Australia and Pakistan.