Australian Cricket has unveiled its renewed vision for ensuring Australia’s favourite sport is a sport for all Australians. A week-long recognition of diversity and inclusion begins at the Carlton Mid One-Day International at the Sydney Cricket Ground between Australia and South Africa to coincide with Social Inclusion Week (22-30 November 2014). 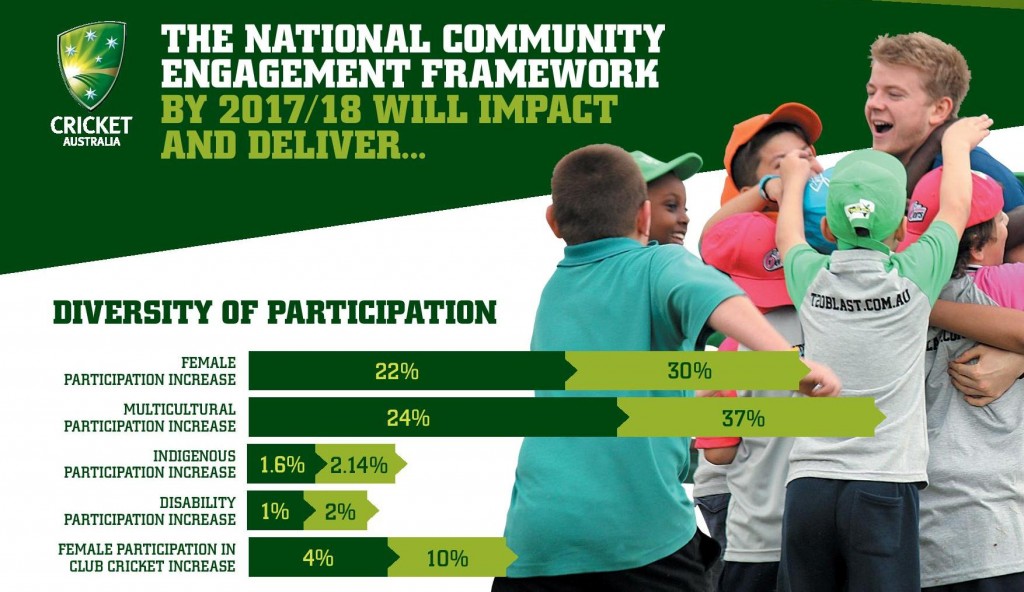 Cricket Australia Chief Executive Officer James Sutherland said cricket must acknowledge the varied needs of Australia’s diverse communities and provide opportunities for all Australians to get involved in cricket.

“Our goal is to be Australia’s favourite sport and to achieve this we must be a sport for all Australians,” Mr Sutherland said.

“Whether you are a girl or boy, man or woman, a player, umpire, volunteer, or administrator, our new Framework is designed to provide the same opportunities to be involved in cricket for all Australians.

“We recognise that Australian society continues to evolve and become more diverse. It is Australian Cricket’s task to adapt to our ever-changing society to continue to provide all Australians with the opportunity to get involved in cricket.”

The National Community Engagement Framework comprises four customised strategies to further increase female, Indigenous, multicultural, and All-Abilities participation, as well as a range of initiatives, including the A Sport For All resource, designed to make cricket more welcoming and inclusive at all levels.

In 2015, Cricket Australia will run 100 workshops with grassroots cricket associations across the nation to introduce the A Sport For All resource as part of the effort to make every cricket club diverse and inclusive.

Australian Cricket’s Reconciliation Action Plan, to be revealed at the SCG today, along with the National Indigenous Cricket Strategy, reinforces its commitment to reconciliation and aims to help strengthen relationships between the wider Australian community and Aboriginal and Torres Strait Islander peoples.

The release of the RAP will be accompanied by a match-day partnership at the SCG today with RECOGNISE, the movement to recognise Aboriginal and Torres Strait Islander peoples in the Australian Constitution. The Recognise ‘R’ symbol will be displayed on the SCG field.

Members from Indigenous partner the Clontarf Foundation will be at the SCG to further support the message of recognition and reconciliation.

Participants from gay Rugby Union tournament, the Bingham Cup, will also take part in Sunday’s events at the SCG, following Australian Cricket’s signing of the Anti-Homophobia and Inclusion Framework earlier this year.

The bold new participation targets are: