Dutch midfielder Rafael Van der Vaart will miss out on Brazil 2014 with a calf injury sustained during training.

Netherlands midfielder Rafael van der Vaart has been ruled out of the World Cup after the experienced international picked up a calf injury at a training camp in Portugal, the Dutch football association KNVB confirmed. 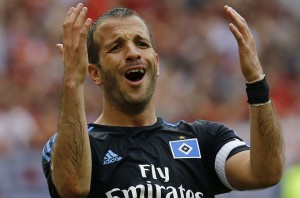 Capped 109 times for his country, the 31-year-old Hamburg midfielder suffered the injury at a training camp for the Brazil tournament with officials saying he was not expected to recover in time to participate in the June 12-July 13 finals.

Van der Vaart sat out training because of a fever before conducting a individual session a day later while the rest of his team mates were preparing to leave the Algarve at the end of the camp.

It was during this session that he was injured but the extent of the tear only confirmed after medical examination in
Amsterdam.

The former Ajax, Real Madrid and Tottenham Hotspur midfielder competed at the last two World Cup finals and was expected to a play a major role for the team in Brazil.

His injury means the Dutch have lost two key midfielders in the run-up to the tournament with Roma’s Kevin Strootman ruled out in March through a serious knee injury.

Van der Vaart had struggled with the calf injury throughout the recently concluded Bundesliga season in which his club
narrowly avoided relegation.

The Dutch are expected to name their final 23-man squad for Brazil on Saturday.

They meet Spain in their opening Group B fixture on June 13, followed by games against Australia (June 18) and Chile (June 23).