A massive landslide in Nepal has killed 12 people, army sources said, and blocked a mountain river causing the water to form a lake that threatens to engulf several villages. 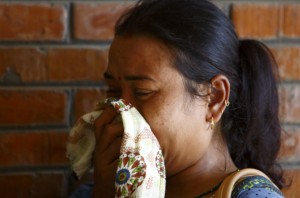 The deaths on Saturday came after the landslide buried two dozen homes before dumping mud and stones into the Sunkoshi river, 120km east of the capital Kathmandu. Thousands were forced to evacuate to higher ground.

Police official Arun Chetri told the Associated Press news agency that rescuers expected the death toll to rise as many homes were buried by the landslide or submerged by the rising water.

Nepal’s Home Ministry ordered the army to help remove the blockade and release the water, and prepare for a disaster if the walls of the newly formed lake burst.

The immediate threat was flash floods in the Sindhupalchowk area as the water there had already formed a 3km long lake.

The Arniko highway, that connects Nepal to Tibet, had also been closed with villagers ordered to move to higher grounds.

Telephone and electricity lines were disrupted but radio stations have been airing the warnings and police using loudspeakers, officials said.

Army helicopters had flown to the area, airlifting some of the injured villagers to hospitals after rainfall has stopped and weather conditions improved.

Landslides are common in mostly mountainous Nepal during the monsoon rainy season, which runs from June through September.

A similar landslide in May 2012 killed at least 26 people when an avalanche blocked the Seti river in northwest Nepal. The walls burst causing flash flood that Sept several downstream villages.