Russia has continued to supply pro-Kremlin separatists in Ukraine with tanks, armored vehicles, rocket launchers and artillery, NATO’s Secretary General has said, echoing comments by Western leaders that the separatists seeking independence are being aided militarily by Moscow. 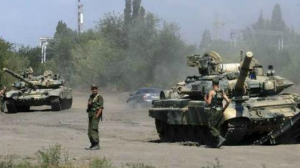 Anders Fogh Rasmussen said on Friday that Russian troops had also “fired on Ukraine from both Russian territory and within Ukraine itself”.

“Despite Moscow’s hollow denials, it is now clear that Russian troops and equipment have illegally crossed the border into eastern and south-eastern Ukraine.

“This is not an isolated action, but part of a dangerous pattern over many months to destabilize Ukraine as a sovereign nation.”

Russia denies intervening in Ukraine by arming separatist rebels or sending soldiers across the border into the cities of Donetsk and Luhansk.

Russian Foreign Minister Sergey Lavrov said the allegations were “conjecture” and that not facts had been presented to support claims made by NATO.

But the separatists continue to take orders from Russia, and on Friday they agreed to let encircled Ukrainian government forces leave the rebel-held areas following intervention from Vladimir Putin, the Russian president.

In Amsterdam, Dutch Prime Minister Mark Rutte said the sanctions against Russia “have not worked” in changing Moscow’s behavior in eastern Ukraine.

He said additional measures had to be considered by the European Union.

Rutte told journalists after a weekly cabinet meeting that Moscow’s presence in Ukraine was “extremely concerning and violates international law”.

“We do not accept it and additional sanctions should not be ruled out,” he said.

Responding to calls by Ukrainian Prime Minister Arseny Yatseniuk for his country to join NATO, Rutte said “joining NATO would not contribute to a solution”.

Ukraine said on Friday it would seek the protection of NATO membership following the open involvement of the Russian military in the war in its eastern provinces.

Formal Ukrainian membership in the Western military alliance – which would come with the full protection of a mutual defense pact with the US superpower – remains an unlikely prospect, at least in the near future, Reuters news agency reported.

But by announcing that it is seeking NATO membership, Kiev is taking its most decisive step yet to pursue Western military protection from what it now describes as an invasion by its neighbor.

Rasmussen said he respected Ukraine’s right to seek membership, which was denied in 2008 when a previous pro-European government in Kiev tried to pursue closer ties with the alliance.

The arrival of what Western governments say are armored columns of Russian troops on a new front in recent days has tipped the balance towards the rebels after weeks in which Ukrainian forces appeared to be gaining the upper hand.

Prime Minister Yatseniuk told a government meeting on Friday the cabinet would “bring before parliament a law to scrap the non-aligned status of the Ukrainian state and establish a course towards membership of NATO.”

Were NATO to contemplate extending its mutual defense pact to Ukraine, it would be the biggest change in the security architecture of Europe since the 1990s.