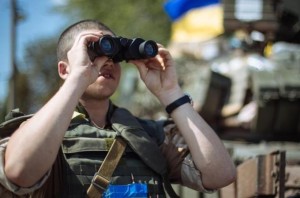 NATO chief Anders Fogh Rasmussen has arrived in Ukraine, amid growing fears of a major Russian incursion as the alliance warns of a troop build-up at the border.

Thursday’s visit comes a day after Ukrainian forces carried out their first air strike on the pro-Russian rebel stronghold of Donetsk, as they said they were preparing to liberate the city, although they also reported their highest death toll in weeks in the face of fierce rebel bombardments.

One person was killed and two injured on Thursday when a hospital was hit by shelling, local health authorities said.

“Today as a the result of a mortar shell hitting the… first Donetsk city hospital, one person died and two were injured,” the regional health administration said in a statement, adding that no medics were among the casualties.

“This is a dangerous situation,” NATO spokeswoman Oana Lungescu said, warning that “Russia could use the pretext of a humanitarian or peacekeeping mission as an excuse to send troops into eastern Ukraine”.

NATO said Russia had increased the number of “combat-ready” troops on its border with Ukraine to 20,000 from 12,000 in mid-July.

Donald Tusk, Poland’s prime minister, said “the threat of a direct intervention [by Russia into Ukraine] is certainly greater than it was even a few days ago”.

German Chancellor Angela Merkel called on Russian President Vladimir Putin to use his influence with the separatists for the “stabilisation” of Ukraine.

Moscow said those making the claims about their troop movements were “selling soap bubbles”.

“Movements of such forces of thousands of troops and equipment are not possible in such a short time,” said Russian defence ministry spokesman Igor Konashenikov.

The United States and European Union have slapped a range of tough sanctions on Moscow, with Switzerland, Japan and Canada following suit, potentially pushing Russia’s fragile economy towards recession.

Putin struck back on Wednesday with import bans and restrictions on farm products from countries that have targeted Moscow.