At least 12 twelve Ukrainian nationalist fighters battling pro-Russian separatists in eastern Ukraine have been killed and an unknown number taken captive, a spokesman for the group has said. 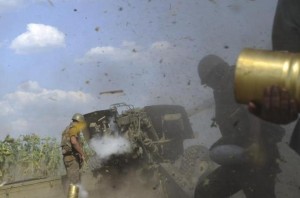 Separatist fighters opened fire on the Right Sector’s bus that was taking the men to fight just outside the rebel-held city of Donetsk, on Wednesday morning, Reuters news agency reported.

The Right Sector is a group of pro-Ukraine nationalists supporting government forces in the fighting.

“They were taking part in a military operation early this morning near Donetsk and were ambushed. Twelve Right Sector fighters were killed,” spokesman Artem Skoropadsky told Reuters.

It was the group’s biggest single loss of life since violence erupted in Ukraine’s Russian-speaking east in April, he added.

The unit had run into separatists unexpectedly because a government forces’ push against the rebels in the last few days had moved them from their usual positions.

“We have suffered terrible losses. We will avenge this,” Right Sector leader Dmytro Yarosh said on his Facebook page.

Video footage from the scene showed the bodies of several fighters dressed in combat fatigues lying near a bus pock-marked on the outside by bullet holes and its windows shattered.

Right Sector played a large role in street protests in the Ukrainian capital early this year that toppled former Moscow-backed president Viktor Yanukovich in February, setting off a confrontation with Russia.

The deaths come as a Russian aid convoy continues to make its way to the border with Ukraine – where it is expected the Ukraine military will stop its entry into the country.