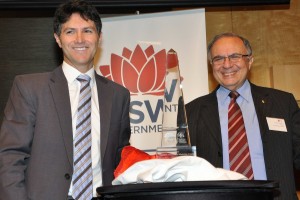 The awards, conducted by the Community Relations Commission of NSW, recognise the achievements of government agencies, business enterprises and community groups in implementing strategies targeting the culturally diverse community.

“These awards are a great institution in multicultural NSW where we understand the great economic resource we have in cultural diversity,” Mr Dominello said.

“Major Australian businesses now realise that tailoring products, services and information to meet the needs of those from non-English speaking backgrounds is simply good business.

“When marketers speak directly to people in their first language, potential customers are attracted to the product or service on offer. National institutions such as the AFL, the Sydney Opera House, the ABC and SBS, have all come to realise that public support and audience numbers depend on successfully appealing to the whole community.”

Last year, the SBS project Pop Asia discovered an untapped market for pop music from Asia and now hosts 10 hours of live radio each week, 24/7 online streaming, two weekly TV programs, a mobile app and a dedicated YouTube channel. It won the Grand Award for multicultural marketing as well as the Advertising and Communication category.

CRC Chairman Stepan Kerkyasharian, who launched the awards in 1990, said: “The success of this venture speaks for itself – 23 years and continuously growing.

“Many things we talked about at the first Multicultural Marketing Seminar in 1989 are now common place. Marketing to the whole population is now part of most sales and promotion plans.

“I urge organisations to enter the awards. There is still potential for the discovery of more exciting and innovative marketing initiatives that can reach broader audiences.” Nominations, which close on 30 August, can be made at: