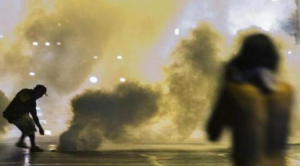 Barely hours before a second night of curfew that came into effect at midnight, police drove into the protest area in armoured vehicles and shot smoke canisters at a crowd of about 400 people, including watching media representatives. The protest had until then appeared to be peaceful.

St Louis city police said that a Molotov cocktail had been thrown towards the police line. However, Private news media’s correspondent in Ferguson said that the incident had not been confirmed by eyewitnesses.

“Tonight, a day of hope, prayers and peaceful protests was marred by the violent criminal acts of an organized and growing number of individuals,” Nixon said in a statement on his website. As a result, Nixon said, he was directing the National Guard to help “in restoring peace and order to this community.”

Michael Brown’s fatal shooting by the police on August 9 while he was walking down the street unarmed in the St Louis suburb has led to days of protests and a heavy-handed police response.

“This militarization of the police department with a heavy-handed presence in a very small city is adding more fuel to the fire,” political analyst Earl Ofari Hutchinson told reporter of the police crowd control tactics.

The police department in St Louis has come under strong criticism for Brown’s death and its handling of the aftermath.

“Everyone we talked to said they are completely fed up with the police attitude towards the community. They say they have experienced harassment by the police several times,”media correspondent reported.

Ferguson authorities say that Brown,18, was shot after an altercation with a police officer identified as Darren Wilson.

Witnesses say the teenager was non-violent and compliant at the time of the shooting, and a victim of racism.

On Sunday, US Attorney General Eric Holder ordered a federal autopsy of Brown’s body, seeking to assure the family and community there will be a thorough investigation into his death.

A preliminary private autopsy, asked for by Brown’s family, found that the teenager was shot at least six times, the New York Times reported.

Citing Dr Michael M Baden, former chief medical examiner for the City of New York, the newspaper reported that Brown was shot twice in the head, and that the bullets that hit him did not appear to have been fired from very close range.

Four shots hit Brown in his right arm and one entered the top of his skull, the Times said, citing findings by Baden.

Baden said his autopsy was not intended to determine whether the shooting was justified.

“In my capacity as the forensic examiner for the New York State Police, I would say, You’re not supposed to shoot so many times,” he told the Times. “Right now there is too little information to forensically reconstruct the shooting.”