Drills are taking place within 20km of the demilitarised zone that separates North Korea from the South. 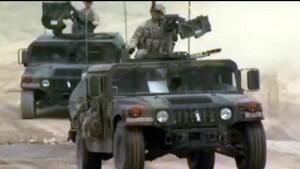 North Korea has accused the United States of hypocrisy for remaining silent over a South Korean missile test while condemning Pyongyang’s recent launches.

“The US double-dealing attitude and despicable mode of action has been brought to light,” a spokesman for the North’s powerful National Defence Commission (NDC) said in a statement on Friday, reported the AFP news agency.

The statement, carried by the North’s official KCNA news agency, comes at a time of elevated military tensions, with Pyongyang threatening a “new” type of nuclear test.

“As long as the US persists in its hostile policy … according to its high-handed, arbitrary and gangster-like double standards, [North Korea] will push ahead with countermeasures for self-defence to put an end to the policy,” the spokesman said.

His remarks were triggered by South Korea’s test-firing last month of a new ballistic missile capable of carrying a one-tonne exposive power to any part of North Korea.

The missile was developed under an agreement reached in 2012 with the United States to almost triple the range of the South’s ballistic missile systems.

The NDC spokesman said the silence that greeted the South Korean launch was in sharp contrast to the US and UN condemnation of the North’s recent test of two medium-range ballistic missiles.

“If the ballistic missile launched by the South Korean puppet forces is not problematic, the [North’s] launch of satellites or rockets should be no problem either,” the spokesman said.

North Korea successfully put a satellite into orbit in December 2012 on a rocket that Pyongyang said was designed for purely scientific missions.

The international community said it was a disguised ballistic missile test and the UN Security Council tightened existing sanctions as a result.