Figures extrapolated from last census in 1983 estimated population at 60 million, but new count finds only 51.4 million.

Myanmar has discovered it has only 51 million people – far less than the previously estimated 60 million, according to preliminary results of the latest census. 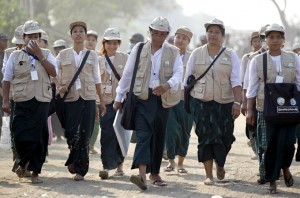 State-run television, which announced the initial findings of the country’s first census in three decades on Friday, said complete results would be released next year.

The census, conducted from March 30 to April 10 with help from the UN Population Fund, counted 51.42 million people.

The previous estimate of 60 million was based on extrapolations from the last census, conducted in 1983.

The tally went smoothly, except in some areas of the western state of Rakhine where an estimated 800,000 members of a long-persecuted Muslim minority were denied the right to identify themselves as “Rohingya”.

The government says they are illegal migrants from Bangladesh and calls them “Bengalis”.

The census contained 41 questions, the most controversial of which was number eight on ethnicity, providing a list of 135 to choose from. The Rohingya option was not on the list.

Some isolated parts of northern Kachin state controlled by ethnic rebels were not counted, the AP news agency reported.