BARCELONA: Smartphone makers are fighting for space on your wrist and your head; lucrative real estate for a new wave of high-tech devices if only they can persuade you to wear them. 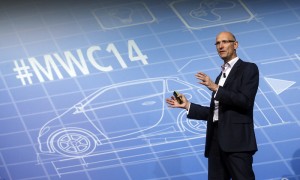 Manufacturers unleashed a battery of new wearable devices at the world’s biggest mobile fair in Barcelona, Spain, trying to carve out new revenue sources in developed markets where smartphone sales are slowing.

From smart bracelets that track your fitness to watches and glasses that let you take a call or check text messages and email, these gadgets are the new stars of the February 24-27 Mobile World Congress.

“I think 2014 is when you will start to see more mass market, or at least wider adoption of these technologies,” he said.

According to an Accenture study of 23,000 consumers in 23 countries, there is a large appetite for such products, with 46 percent saying they were interested in smart watches and 42 percent in smart glasses.

The first target is fitness fanatics, wooed with bracelets that record the number of steps they take, the distance travelled, calories used, or even their heartbeat.

US firm Fitbit, leader with more than 60 percent of the market for wearable fitness devices, has invited congress visitors to join a contest by strapping on a bracelet during their stay in Barcelona. The winner is the competitor who has moved most.

“We will have 1,000 participants by the end of the week,” said Benoit Raimbault, head of marketing for Europe, stressing that the bracelet prods you to “move more, eat better and sleep better”.

“Today the market for fitness bands is growing well and this segment will be exploited over the next years,” said Annette Zimermann, analyst at technology consultants Gartner Inc.

Sony Mobile revealed on the opening day of the fair its SmartBand SWR10, a bracelet that comes with an application allowing users to log events and photographs taken during the day as well as tracking how far they walk and checking their sleep cycle.

Smart watches, connected by wireless Bluetooth technology to the smartphone, are still trying to find a mass market, however, said Zimermann.

“Smart watches still lack good design and functionality so uptake of those devices have been very slow,” she explained.

Research house Canalys nevertheless predicts a boom in connected bracelets and watches, with sales surpassing 17 million units this year and approaching 45 million in 2017.

“It’s about having an independent product that works as a standalone and does not need to be connected to your smartphone,” said Archana Vidyasekar, specialist at analysts Frost & Sullivan.

“I think that is going to define the success of the market in the consumer industry.”-‘ The first elegant smartwatch’ –

Samsung was one of the first heavyweights to enter the market, releasing last September its Galaxy Gear smartwatch, which lets a user read text messages and emails, check online services such as the weather and make calls.

But with a lukewarm reception from critics and, according to analysts, disappointing sales, Samsung launched a new version Sunday, the Gear 2, which includes a camera, TV remote control and a heart rate sensor.

Chinese smartphone maker Huawei revealed a connected watch of its own on the same day, a TalkBand, to be sold for 99 euros ($136).

“All the connected watches are with sports designs or geeks designs; my wife wouldn’t wear that,” said Creoir marketing chief Ismo Karali. Already famous though not yet on sale, Google Glass is the showpiece of the third category of wearable device: connected glasses that let you check your emails, for example, with no more than a glance.

“I have been using it for about a month, but they are very intuitive, I gave it to my six-year-old daughter and she was able to figure it out within minutes,” said Cameron Green head of mobile business at technical standards group GS1, who has been testing the Google Glass.

GS1, which creates bar-codes, wants to use the glasses to let customers peer through them and see the all relevant information about a product. For now, smart glasses seem to be attracting technophiles and certain professional groups, industry experts say.

“For many vendors though, wearables are just the thing they have got to do as the smartphone penetration caps and margins are under pressure,” said Carolina Milanesi, analyst at consumer behaviour group Kantar WorldPanel.

“Approached that way, it is unlikely that the vendors will focus on delivering the best experience at the best price. I still feel that 2014 will be a year of trial and error in trying to convince consumers that wearables are a ‘must have’,