LONDON: Chief of Muttahida Qaumi Movement (MQM) Altaf Hussain said that the matters relating to former President Pervez Musharraf should be solved on merit instead of personal like 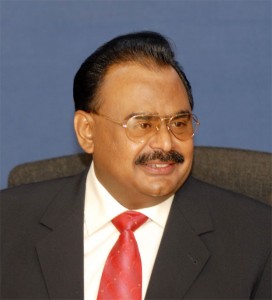 The statement was made by the MQM Chief during a farewell lunch for the outgoing Pakistani High Commisioner in London Wajid Shams-ul-Hassan. He said that that its utmost necessary to prevent anarchy and hyprocrisy from spreading in the country due to the internal and external problem which it is facing.

Altaf Hussain further said that Pakistan is alone in the diplomatic front whereas the people claiming to love Pakistan are also not true to their words. “I can only provide sincere feedback”, he added. Appreciating the six-year service of Wajid Shams-ul-Hassan, Altaf Hussain stated that Pakistan needed a high commissioner who is talented and experienced. He also said that the party respects the decision made by the federal government.

The outgoing Pakistani High Commissioner thanked Altaf Hussain for his cooperation in the past six years. Chief MQM advised his elected Parliamentarians to continue their struggles for providing relief to the nation. He added that the National Assembly members should concentrate on improving the quality of education and construct libraries in their constituencies.