Greater Western Sydney Giants Football Club was named as the winner of the Big Business Award at the Australian Multicultural Marketing Awards for its success in promoting the Aussie Rules Football to migrant communities. By promoting inclusivity, the GWS Giants Football Club ran a Multicultural Round marketing campaign translated into 17 languages, to celebrate the many wonderful cultures in Western Sydney. Their strategies included hosting an Iftar dinner for community leaders, engaging schools with ticket offers and giveaways, and hosting a citizenship ceremony.

The Australian Multicultural Marketing Awards, conducted by Multicultural NSW, recognize and reward the efforts of government agencies, businesses and organisations which successfully implement marketing strategies tailored for culturally diverse communities. The awards promote best practice in marketing and encourage the leaders in the industry and role models in seizing business opportunities through inclusive marketing.

“Debuting in 2012, the Giants faced the difficult task of growing a fan base from scratch in a region where other football codes have dominated the junior ranks for decades. Tonight the club has been recognised for its innovative engagement with multicultural communities,” said Minister for Citizenship and Communities Victor Dominello, who announced the winners at a gala reception at the Sydney Opera House attended by over 250 people.

“On 19 July, during the AFL’s Multicultural Round, the Giants used their match against the Geelong Cats in Sydney to put on a celebration of cultural diversity like no other. The pre-game and half-time entertainment included a formal citizenship ceremony for 54 new Australians on the field, a guard of honour for the players by international students, Arabic drummers and African, Chinese, Irish and South Pacific dance performances.

“In a thoughtful gesture, the Giants also presented the new Australian citizens with club memberships. I congratulate the club for raising the bar on multicultural engagement.”

Meanwhile the Chinese Precinct of Commerce was named winner of the Communities Category of the Awards for a campaign to motivate and enthuse members of the Chinese Australian community to embrace commemorations for Centenary of Anzac.

The company eTranslate received the Business Innovation award for employing an App to measure the mood of our Cultural Communities. It launched an online app providing a free newsfeed in 12 languages to monitor reaction to the news and gauge sentiment among different communities. With an awareness campaign spanning community print media, radio, a website and social media, the app has now reached 120,000 readers across all Australian states. 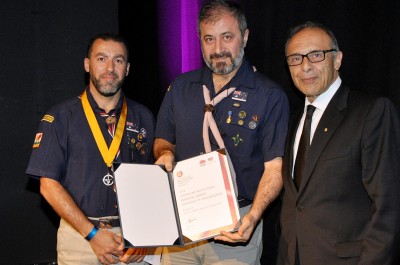 CEO of Multicultural NSW Hakan Harman said he was delighted with the response to the new format adopted for the 25th edition of the annual Awards. “Since culturally diverse is who we are as Australians, messaging and programs that speak to all the people of Australia are essential elements of any marketing campaign.
“This year’s entries set a high standard for others to follow and I wholeheartedly congratulate all of AMMAs winners.”