By Patrick Wintour;  The Guardian

Exclusive: Repeat of Afghanistan-or-Iraq-style invasion ruled out for war-weary UK, according 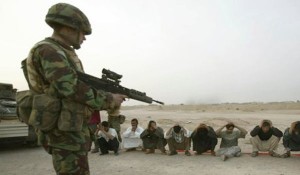 A growing reluctance in an increasinglymulticultural Britain to see UK troops deployed on the ground in future operations abroad is influencing the next two strategic defence reviews, according to senior figures at the Ministry of Defence.

As well as a general feeling of war weariness, sources say they have sensed a resistance in an increasingly diverse nation to see British troops deployed in countries from which UK citizens, or their families, once came.

There is also concern that British troops have been seen taking action mainly in Muslim societies.

The MoD is still taking stock of the surprise decision of the House of Commons last summer to rejectmilitary intervention to punish President Assad of Syria for the use of chemical weapons against rebel forces.

Senior figures believe the rejection of that action was not just the by-product of a political battle betweenLabour and the government, but revealed deeper-seated long-term trends in British society.

One of the issues raised is improving the recruitment of British officers from minority ethnic communities.

Sources stress that they do not believe that a change in attitudes rules out overseas British intervention, but more will have to be planned on the basis of air and naval activity, rather than large-scale use of troops on the ground.

Future configurations would make the recent intervention in Libya possible, or the kind of relatively small-scale operations recently being undertaken by the French military in Africa last year, but not a repeat ofAfghanistan or Iraq.

The sources cite a long-term weariness in the British population and the widespread perception that both Iraq and Afghanistan have not been worthwhile.

David Cameron has said British troops can return from Afghanistan with their heads held high at the end of this year, but polls suggest the war has become increasingly unpopular.

Ministers maintain that this high-level analysis about the decline of British militarism does not mean the army should be reduced further than the cuts due to be announced by the army on Thursday, when 1,400 more troops are expected to lose their jobs.

Ministers are also bracing themselves for strong criticism, probably this summer, by the marathon inquiry conducted by Sir John Chilcott over the UK’s conduct in the run- up to the Iraq war in 2003.

Tony Blair has admitted to political allies that he expects it to be revealed that he gave George W Bush strong unequivocal support at a private summit in Texas in April 2002, well before the attack on Iraq, but will point to the fact that he was given an opportunity to draw back from the invasion.

The eventual budgetary health of the MoD may depend on whether the prime minister decides in the next parliament that the budget for health, schools and overseas aid should remain protected, so putting additional pressure on the Whitehall departments that are not protected – notably defence.

The defence secretary, Phillip Hammond, made efforts before the last spending review to blend some of his budget with that of overseas aid, but was repulsed by the very tight international definitions of overseas aid set by agencies such as the OECD.

It is likely that Hammond will press for the definitions to be re-examined or for the Conservative party to lift the ringfence on aid in its manifesto for the 2015 general election.

Speakingon Wednesday, the head of the British army, General Sir Peter Wall, expressed hope that the latest round of redundancies in the military to be announced in the Commons on Thursdaytoday would be the last.

Hammond is expected to disclose that a further 1,400 army jobs are to go, including about 350 Gurkhas. Although the total is about half of what had been widely predicted, it will be the fourth round of redundancies. The army has borne the brunt of them. The navy and air force are expected to escape relatively unscathed, with the RAF losing about 70.

Wall, chief of the general staff, speaking before the latest figures were published, told journalists he did not anticipate any further job losses after Thursdaytoday. “This draws a line under the forced exodus of people from the army,” he said.

But Wall’s view may not be shared by the Treasury, which could see the military post-Afghanistan as an easy way to make budget cuts and come back for more after next year’s general election.

Wall said: “This redundancy tranche marks the final leg of our reduction of the army from its former strength to 82,500. It is the end of a period of particular uncertainty.”

British forces are scheduled to withdraw from Afghanistan by the end of the year, leaving only a few hundred behind to help with training and advice, assuming an agreement is reached with the Afghanistan government on retaining troops beyond 2014.

Much of the reduction of the force to 82,500 will the achieved through natural wastage. The army is struggling to recruit regulars and reservists in the face of falling unemployment and, with the end of involvement in Afghanistan, no immediate prospect of combat.

About 70% of the redundancies could be voluntary. The army is engaged in a marketing drive to try to secure more recruits. To try to fill gaps left by the cuts to the regular forces, it wants to increase the size of the reserves and to integrate them more into the regular force.